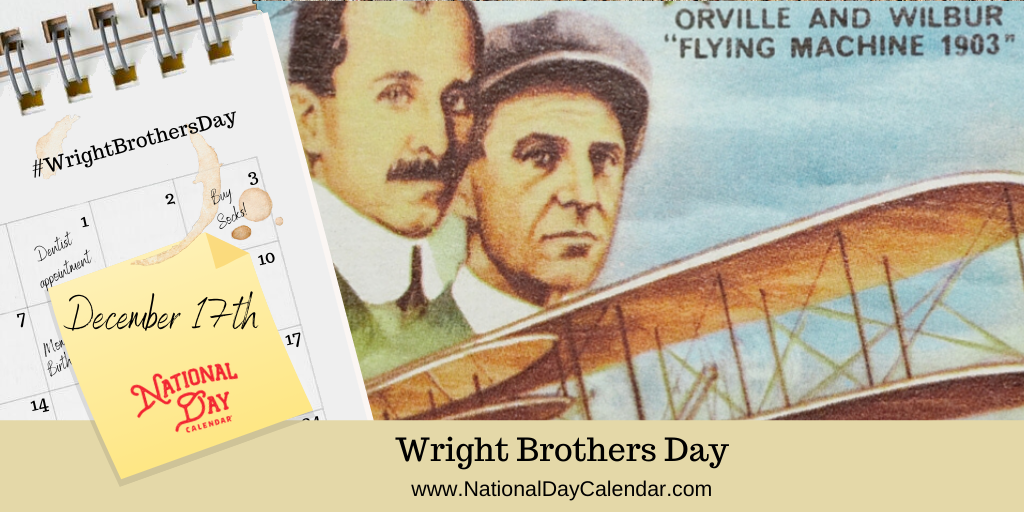 By Presidential Proclamation, December 17th is Wright Brothers Day. Each year, a proclamation invites the people of the United States to observe this day with appropriate ceremonies and activities.

The US Code directs that Wright Brothers Day commemorates the first successful flights in a heavier than air, mechanically propelled airplane. Orville and Wilbur Wright made that first successful flight on December 17, 1903, near Kitty Hawk, North Carolina. While other inventors created planes that flew, Orville and Wilbur invented the first mechanically propelled aeroplane. Those inventors who came before them inspired the Wright brothers in many ways, too.

From a young age, Orville Wright and his brother, Wilbur, developed a fascination with flight. Inspired by a rubber band propelled helicopter created by the inventor, Alphonse Penaud, the brothers dedicated their lives to the invention. They first found success manufacturing bicycles, including the Van Cleve and St. Clair.

When is National Aviation Week?

They never lost interest in flight and continued to develop designs. By 1902, the future aviators were making progress with their gliders and nearing a successful mechanical flight. They sold their bicycle business, and on December 17, 1903, achieved their goal.

Wright Brothers Day also recognizes other accomplishments in aviation history. Many exciting accomplishments, adventure, and daring heroism take place in aviation. In fact, numerous museums and landmarks around the world will walk you through aviation’s impressive timeline. From the National Aviation Hall of Fame in Ohio to March Field Air Museum in Riverside, California, and the Air and Space Museum in Washington, D.C., nearly every state in the U.S. fills the imagination with original and replica planes of the pioneers of flight. Even the early frontier of space flight makes the schedule for aviation enthusiasts! Cape Canaveral and Kennedy Space Center will not disappoint.

Of course, local libraries answer the call with shelves lined with books about every era of aviation. NASA also offers free e-books.

Explore the history of flight. While you’re at it, discover other fascinating adventurers, too! Here’re a few names to get you started.

Would you like to learn more? We celebrate aviation throughout the calendar. Check out these days, too!

Are you looking for other ways to celebrate the day? Consider these options.

A joint resolution of Congress declared December 17, 1963, as Wright Brothers Day. Congress later amended the resolution (77 Stat. 402; U.S.C. 143), designating December 17th of each year as Wright Brothers Day and authorized the President to issue annually a proclamation inviting the people of the United States to observe that day with appropriate ceremonies and activities.

Q. What was the name of the Wright Brothers’ flying machine?
A. The brothers named the machine they flew on December 17, 1903, the Wright Flyer.

Q. Who flew the Wright Flyer?
A. On December 17, 1903, Orville Wright flew the first successful flight. However, Wilbur bested his brother’s first flight. On the last and fourth flight of the day, Wilbur flew 852 feet (255.6 meters) in 59 seconds.

December 17th Celebrated (And Not So Celebrated) History

Arthur Baldwin Turnure published the first edition of the society and fashion journal titled Vogue. It recorded the “ceremonial side of life” in the world of debutants and the upper class.

The NFL host their first Championship Game. The New York Giants battled against the Chicago Bears at Wrigley Field in Chicago before a crowd of 30,000 fans. In a thrilling comeback, the Bears defeated the Giants, 23-21.

The animated television show The Simpsons debuts on Fox. Created by Matt Groening, the show featured the Simpson family, including husband and wife Homer and Marge, their children Bart, Lisa, Maggie, and Homer’s father, Grandpa Simpson.

On the 100th anniversary of the Wright Brothers’ powered flight, pilot Brian Binnie achieved supersonic flight in SpaceShipOne. Designed by Burt Rutan, it was the first time the privately built spacecraft had reached such speeds.

December 17th Celebrated (And Not So Celebrated) Birthdays

During the Revolutionary War, Sampson disguised herself as a man using the name Robert Shurtliff and enlisted in the Continental Army. She is one of a handful of women who also received a military pension at that time.

The British mathematician was a leading contributor to chaos theory. In 1947, Cartwright was elected to the Royal Society. She was also the first woman to serve on its council. In 1964, she also became the first woman to receive the society’s Sylvester Medal.

After taking her vows from the Sisters of Charity of the Blessed Virgin Mary in 1940, Sister Mary Kenneth attended DePaul University in Chicago. She studied mathematics and further pursued an education in computer science. On June 7, 1965, she became the first woman in the United States to receive a Ph.D. in computer science.

One half of the Baskin-Robbins Ice Cream business duo, Burt Baskin joined his brother-in-law Irv Robbins in 1948.

In 1960, Kendricks founded the American vocal group The Temptations. Their original line-up included Kendricks, Otis Williams, Melvin Franklin, David Ruffin, and Paul Williams. Kendricks’ falsetto voice complemented several hits by The Temptations, including “My Girl,” “The Way You Do The Things You Do,” and “Hey Girl.”