Our Favorites this Month
Check out our favorite topics this month 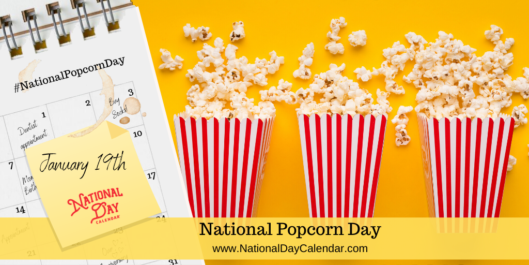 National Pie Day on January 23rd celebrates one of the Nations' favorite desserts. No matter how you slice it, pie in just about any form makes a crowd happy.
Advertisement

Hear the stories behind why we celebrate each National Day!

Welcome to January 25th, 2022 on the National Day Calendar. Today we celebrate the Sunshine State and a delicious cold weather cure.  According to legend, the Fountain of Youth would grant anyone who drank from it the gift of long life. This story had existed for hundreds of years, but no one knew where it was. When the Spanish explorer Ponce de Leon heard rumors from natives in the Caribbean, he set sail to find it. Heading north in search of this miraculous fountain, he came upon land and went ashore. He named the land after the Spanish Easter celebration—The Feast of Flowers, or Pascua Florida. Though he never did find it, you can visit the Fountain of Youth Archaeological Park in St Augustine, Florida. It won’t actually grant you eternal youth, but you will get to explore the oldest city in America. On National Florida Day, we celebrate the Sunshine State and all the natural beauty it has to offer. On a cold, wet day in 1942, weary travelers to the small Shannon Airport in Southern Ireland found their way to a restaurant run by Joe Sheridan. To warm his guests, Joe served them hot coffee spiked with whiskey and topped with a pillow of whipped cream. One of these guests was travel writer Stanton Delaplane who brought the idea of Irish Coffee to the owners of the Buena Vista Cafe in California in 1952. Intrigued by his story they tried to recreate the flavor, but concluded that it required a pilgrimage of their own to Joe’s restaurant. Their efforts were rewarded with the secret to floating the whipped cream on top and the authentic flavor has been enjoyed Stateside ever since. On National Irish Coffee Day, celebrate the folks who went the distance to bring us this cold weather cure. I’m Anna Devere and I’m Marlo Anderson. Thanks for joining us as we Celebrate Every Day!  Learn more about your ad choices. Visit megaphone.fm/adchoices

Welcome to January 24th, 2022 on the National Day Calendar. Today we celebrate honeyed words and spreadable gold.  When comic book legend Stan Lee opened his mail one day in 1963 he got what can be called an enthusiastic letter from a fan. It read: “Fantastic Four #17 was greater than great. Even now I sit in awe of it. It was stupendous! It will live forever as one of the greatest of ALL comics.” The compliment most certainly made him smile, but so did many other fan letters. So what made this one so special? Well, it was written by a boy named George R. R. Martin, who later created Game of Thrones. So what was Stan’s reply to this glowing compliment? “We might want to quit while we’re ahead. Thanks for your kind words, George.” On National Compliment Day, take a moment to send kind words to someone who deserves them. And by all means, be gracious if one gets sent your way. Peanut butter lovers will eat the spread straight from the jar, but it wasn’t quite as yummy at first. In the early 20th century, inventors saw the paste as a protein solution for patients who couldn’t chew meat. The noble efforts of Marcus Edson, Dr. Kellogg and Dr. Straub advanced the cause, but it was Joseph Rosefield who brought peanut butter to the masses. This food chemist from California struck gold when he developed the process for stabilizing peanut butter into a smooth, creamy concoction. He licensed the technology to a company that made Peter Pan peanut butter, but grabbed up his own share of the market with Skippy brand in 1932. On National Peanut Butter Day, celebrate this addictive spread with your choice of chunky or smooth. I’m Anna Devere and I’m Marlo Anderson. Thanks for joining us as we Celebrate Every Day!  Learn more about your ad choices. Visit megaphone.fm/adchoices

Welcome to January 23rd, 2022 on the National Day Calendar. Today we celebrate winding words and the taste of home.  After the fall of the Roman Empire, civilizations across Europe took many different paths. So did writing. All books were handwritten in Latin, but depending on the region, the script could look much different. Scribes each put their own spin on letters and sometimes a letter like S would be big and loopy, and another it could be tiny. As a result, writing in one area of Europe looked wildly different from writing in another. When the Holy Roman Empire came to power, Charlemagne made it a point to standardize writing across Europe. He commissioned an English scholar to create a standardized font known as Carolingian miniscule. This form of writing was the first to make use of upper and lower case letters, as well as rules for spacing and punctuation. On National Handwriting Day, we celebrate twists and turns of scripts around the globe. If you’re from England this means the savory kind with some kind of stewed meat and spices, but in America pie is dessert. And it’s not just one of those “driving on the wrong side of the street” differences. When Mark Twain wrote A Tramp Abroad after traveling through Europe, he made a list of all the foods he would eat upon returning to his home in America: apple pie, peach pie, pumpkin pie, and squash pie. And to drive the point home, his recipe for English pie went as follows: “Construct a bullet proof dough, fill with stewed dried apples aggravated with cloves, then solder on the lid and set in a safe place till it petrifies. Serve cold at breakfast and invite your enemy.” Things have certainly improved since 1880, but one thing is sure, on National Pie Day folks still celebrate with their own flavor of home.  I’m Anna Devere and I’m Marlo Anderson. Thanks for joining us as we Celebrate Every Day!  Learn more about your ad choices. Visit megaphone.fm/adchoices

Welcome to January 22nd, 2022 on the National Day Calendar. Today we celebrate having fun with our kids the brownie’s blonde cousin.  Charles Swindoll said that each day of our lives we make deposits in the memory banks of our children. Today is the day to make that investment count by letting our kids know how much we love them. Celebration of Life Day is about appreciating the Now, whether it’s a walk in the park together, coloring or reading a book. And if you wanna score extra brownie points, why not let them choose the activity? Kids grow up much faster than we can imagine. And while your children may be racing towards adulthood, they are never too old to appreciate your attention and encouragement. This day is for everyone who loves a youngster, be they parents, grandparents, or uncles and aunts. It’s a gentle reminder that the best thing you can give your children is time. If you believe that brownies have all the fun, then make room on your plate for the “blondie.” It turns out that the first brownies didn’t have cocoa at all but got their color from molasses. It’s believed that these dessert bars originated in Sandusky, Ohio at least 10 years before their chocolate cousins. When chocolate became the norm in the early 1900s they told the bars apart by calling the original the blondie. This name appeared in recipe books of the 1940s and called for light brown sugar instead of molasses. Blondies have all the caramel sweetness of a chocolate chip cookie with the soft fudgy texture of a bar. On National Blonde Brownie Day add a scoop of ice cream, some toffee and nuts for the ultimate sweet tooth celebration. I’m Anna Devere and I’m Marlo Anderson. Thanks for joining us as we Celebrate Every Day!  Learn more about your ad choices. Visit megaphone.fm/adchoices
Advertisement
In the News
See what other's have to say about National Day Calendar.
On #ApplePieDay, "If you wish to make an apple pie from scratch, you must first invent the universe."
Carl Sagan
"One of the most complete and underrated crafts is celebrated today, as it is National Bartender Day. Part janitor, part charmer, part shrink, part recipe encyclopedia, all grind. My people. Cheers!"
Ryan Prominski
“What I found useful was the discovery of an even higher power, if you will, of national calendar days: an organization called National Day Calendar”
Beth Golay
Books and What Not
Advertisement