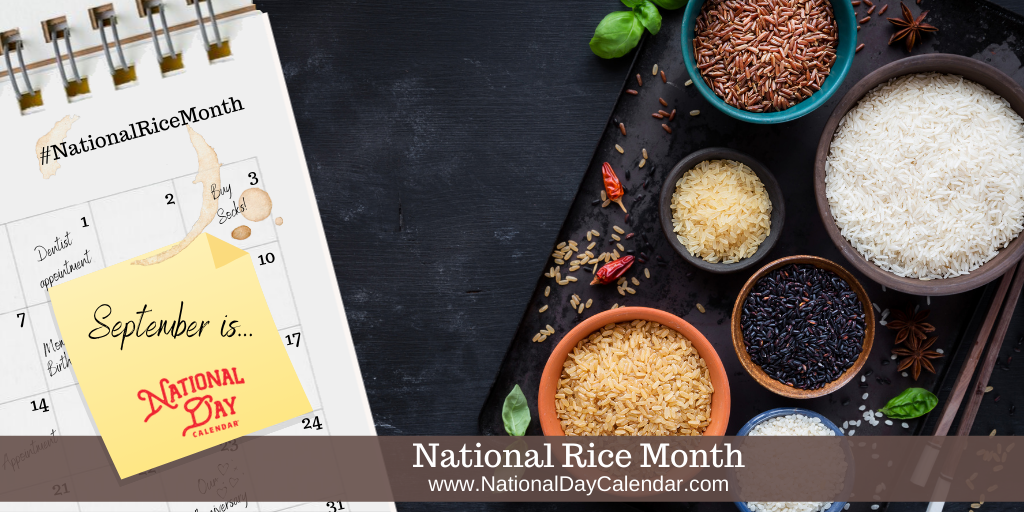 We celebrate National Rice Month throughout the entire month of September. With over 40,000 kinds that grow on every continent, except in Antarctica, we have 30 days to discover as many varieties as possible!

Rice is the oldest known food still consumed today. Rice was first grown about 130 million years ago in the south-eastern part of Asia.  The Chinese word for rice is the same word used for food. However, rice is more than food; it’s part of the national culture. Many cultural customs date back to the days of wet rice cultivation. The historic commitment to group harmony is a predominant custom of the original culture for communal rice cultivation. In China, young girls are told that they must eat all the rice on their plates because each grain of rice represents a pockmark on the face of their future husbands! Interestingly, Chinese and Japanese heritage both cultivate rice as a part of their culture.

Rice is the second-highest grain produced worldwide after maize (corn). Nearly 85% of rice consumed in the U.S. is grown domestically is six states: Arkansas, California, Louisiana, Mississippi, Missouri, and Texas. Rice is a complex carb, low in fat, making it very healthy to eat!

There are four types of rice and each is different from one another:

There are several ways to celebrate National Rice Month. Preparing some jambalaya, fried rice or rice pudding for the family is a great way to celebrate at the kitchen table! While shopping for rice, look at what varieties are available. Mix and match to create your own delight!

Use #NationalRiceMonth in social media correspondence.

U.S.A. Rice designated September National Rice Month to encourage the use of the small but mighty grain in our daily dining.