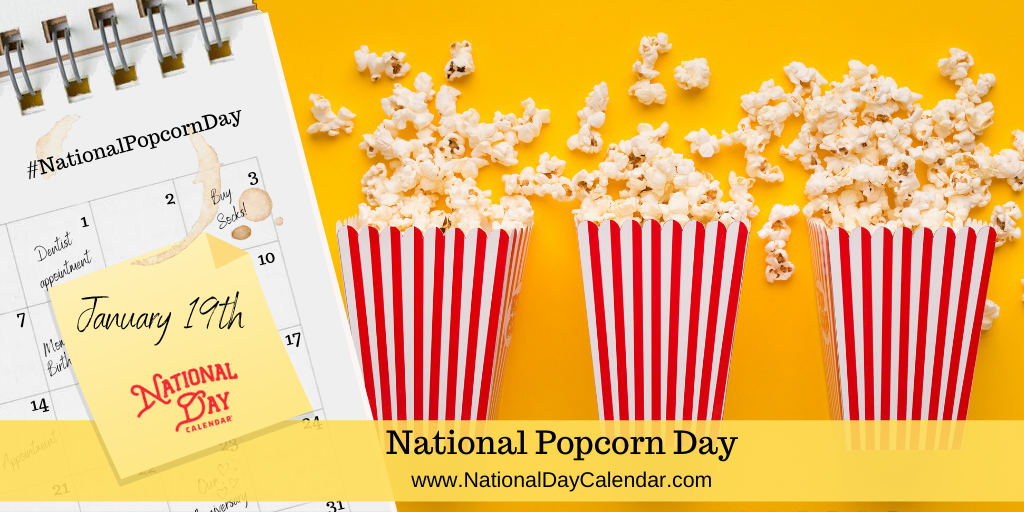 This time-honored snack can be sweet or savory, caramelized, buttered or plain, molded into a candied ball, or tossed with nuts and chocolate. However it is enjoyed, enjoy it on National Popcorn Day, January 19th.

The word “corn” in Old English meant “grain” or, more specifically, the most prominent grain grown in a region. When Native Americans introduce their most common grain, maize, to early Europeans, they aptly applied the word “corn.”

As early as the 16th century, the Aztecs used popcorn in headdresses worn during ceremonies honoring Tlaloc, their god of maize and fertility. Early Spanish explorers were fascinated by the corn that burst into what looked like a white flower.

Popcorn started becoming popular in the United States in the middle 1800s. It wasn’t until Charles Cretors, a candy-store owner, developed a machine for popping corn with steam that the tasty treat became more abundantly poppable. By 1900 he had horse-drawn popcorn wagons going through the streets of Chicago.

At about the same time, Louise Ruckheim added peanuts and molasses to popcorn to bring Cracker Jack to the world. Then in 1908, the national anthem of baseball was born. Jack Norworth and Albert Von Tilzer wrote Take Me out to the Ballgame. From that point onward, popcorn, specifically Cracker Jack, became forever married to the game.

Another romance connected to popcorn may have had a slow start but eventually took off. Today, who can imagine going to the movies without getting a box of buttered popcorn? While popcorn was an economical choice for snack food, the expense of installing a machine and adequately venting the building didn’t seem worth the effort. If it weren’t for Glen W. Dickson, we would be purchasing our popcorn from a vendor on the street before taking in the show. Dickson put in the effort and expense of placing machines inside his theaters. After realizing how quickly he recouped his costs, other theater owners followed suit.

The microwave oven spurred the next big advancement for popcorn. With the invention of the microwave, a whole new market opened for the snack food. Magnetrons, a technology produced by Raytheon Manufacturing Corporation for the military during World War II, were later used to develop microwave ovens. Percy Spencer was the man who made it happen. He used popcorn in his initial experiments during the microwave’s development.

Today, Americans consume 13 billion quarts of popcorn a year, more than any other country in the world. A majority of the popcorn produced in the world is grown in the United States. Nebraska leads the corn belt in popcorn production.

National Day Calendar began on National Popcorn Day in 2013. Pop your favorite popcorn and share a bowl with a friend. Please take a photo and share it on social media using #NationalPopcornDay.

Educators and families, visit the National Day Calendar Classroom for projects and ideas to help you Celebrate Every Day with your students.

Celebrate National Popcorn Day by reading about the happenings in the Kansas City area in the Celebration Spotlight with Priscilla Subramaniyam.

The a-maizing origins of this pop-ular day is mysteriously amiss. However, we have been celebrating the day since at least 1988.

Q. Which state produces the most popcorn?
A. Nebraska is the top popcorn producer in the United States. Also known as the Cornhusker State, although it’s third in overall corn production.