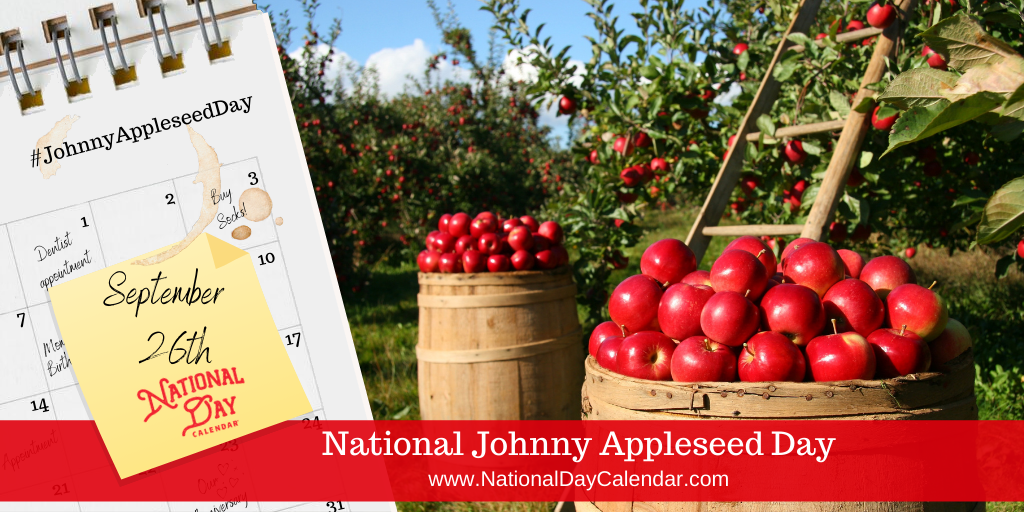 On National Johnny Appleseed Day, we honor the man who made apple (and pear) trees grow heavy with the bounty of their fruit across most of this country. On September 26th, we commemorate the day of his birth and celebrate his legendary wit, wisdom, and enduring story.

He was born John Chapman on September 26, 1774, in Leominster, Massachusetts, to Nathaniel and Elizabeth Simons Chapman. Nobody knows much about his early life other than his mother died when he was two. His father packed up Johnny and his sister (an infant brother had died the previous year) and moved to Springfield, Massachusetts. His father served as a Minuteman and fought at Bunker Hill. In Fort Wayne, Indiana, in Johnny Appleseed Park, a grave marks the spot where the legendary sower of apple seeds rests.

From Chapman to Appleseed

Then in 1797, Chapman shows up in northwestern Pennsylvania propagating his apple seeds and working his way steadily into the frontier of West Virginia, Ohio and Indiana. Eventually, he travels as far west as Illinois and Iowa and as far north as Michigan and Wisconsin.

In his wake, Appleseed left orchards and the teachings of Emanuel Swedenborg. Swedenborg was a Swedish spiritual leader whose books Appleseed would buy with whatever payment he might receive for his endeavors. In turn, the traveling nurseryman would give the books away as he traveled and planted.

Mostly, though, he planted his seeds and seedlings for free along with his wisdom. His broad-brimmed pasteboard hat kept the sun from his eyes wherever he went. Often shoeless, he traveled mostly by foot and sometimes by horseback or canoe. His appearance was nearly as noteworthy as his accomplishments, but so was his kindness. If Johnny Appleseed came calling, people made a place at the table.

Many stories tell how the man would travel many miles to nurse an ailing orchard when word would reach him of its poor condition. While bringing the trees back to health (his chief endeavor), the orchard man dispersed his wisdom, care, and kindness.

Across the Midwest, landmarks pepper the countryside honoring the man who brought fruit to the frontier. Warren County, Pennsylvania lays claim to Johnny Appleseed’s first tree nursery. Mansfield, Ohio honors the man with a monument in South Park.

In his hometown of Springfield, Massachusetts there is an entire park named after the man who nurtured the land and made apple trees bloom across a young nation.

Johnny Appleseed Day is celebrated on either March 11th or September 26th. While the September date is Appleseed’s acknowledged birth date, the March observance is sometimes preferred due to the planting season. Even though there is some vagueness concerning Appleseed’s death and burial, it is known he became ill in early March and passed soon after.

As the fruit ripens on these autumn days, savor a deliciously sweet apple. Consider visiting a landmark near you. Share an apple treat or read one of the many stories about Johnny Chapman. Use #JohnnyAppleseedDay to post on social media.

National Day Calendar® continues to research the creator or founder of this legendary national day.