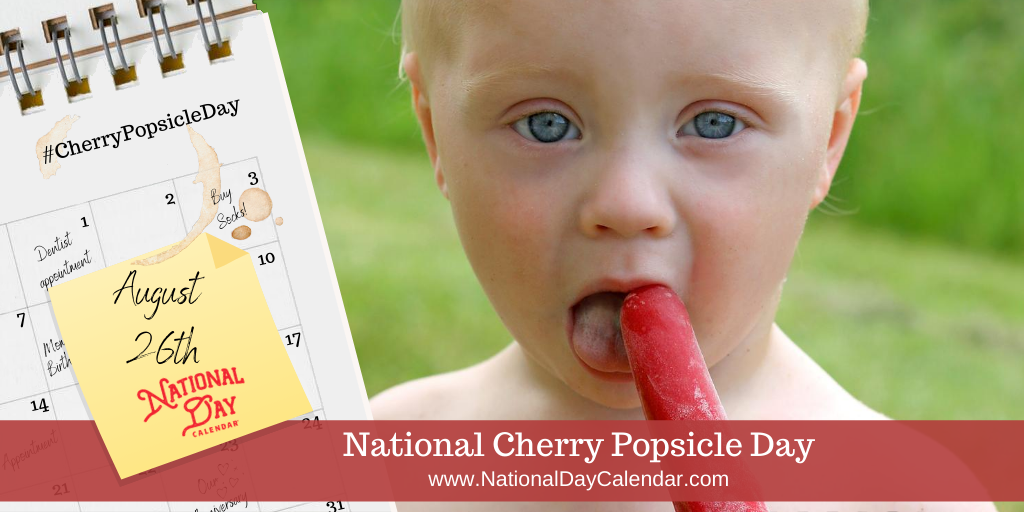 Each summer on the 26th of August, Popsicle lovers across the United States enjoy celebrating National Cherry Popsicle Day.

An 11-year-old Frank Epperson inspired the creation when he invented the original Popsicle back in 1905. After mixing up a powdered soda, he left the beverage overnight with the stirring stick in it. Temperatures dropped unusually low that night and the next morning, Epperson found the liquid frozen on the stick. He dubbed the creation the Epsicle.

When is National Blueberry Popsicle Day?

It wasn’t until years later, in 1922 during a fireman’s ball, that he introduced his frosty treat. With the Popsicle’s huge success, Epperson proceeded to make and sell his frozen sweetness at an amusement park in Alameda, California.  By 1924, Epperson applied for a patent by that name, too. Sometime later, he changed the name to Popsicle.

Popsicle is the name brand of a frozen juice concoction on a stick. However, it’s so common, many people use the word for all frozen juice pops. Other name brand products that became household words include Kleenex, Crock-Pot, and Chapstick. But hundreds exist! The word for this phenomenon is called an eponym.

Of course, as one of the summertime’s favorite treats, this celebration honors one of the top flavors of Popsicles!

Have some fun and try making one of the following Cherry Popsicle recipes:

We were unable to find the creator of National Cherry Popsicle Day.

Q. Is there a Popsicle Day?
A. No, but we do celebrate other flavors of popsicles on the calendar including, National Grape Popsicle Day and National Blueberry Popsicle Day.

Q. Is ‘popsicle” a brand name?
A. Yes. The brand “Popsicle” is owned by Good Humor-Breyers. However, the eponym “popsicle” has become used to describe many frozen flavored treats.

Q. How many calories are in a Popsicle?
A. A 140 gram serving contains 45 calories. According to the package, a serving size is 3 Popsicles.