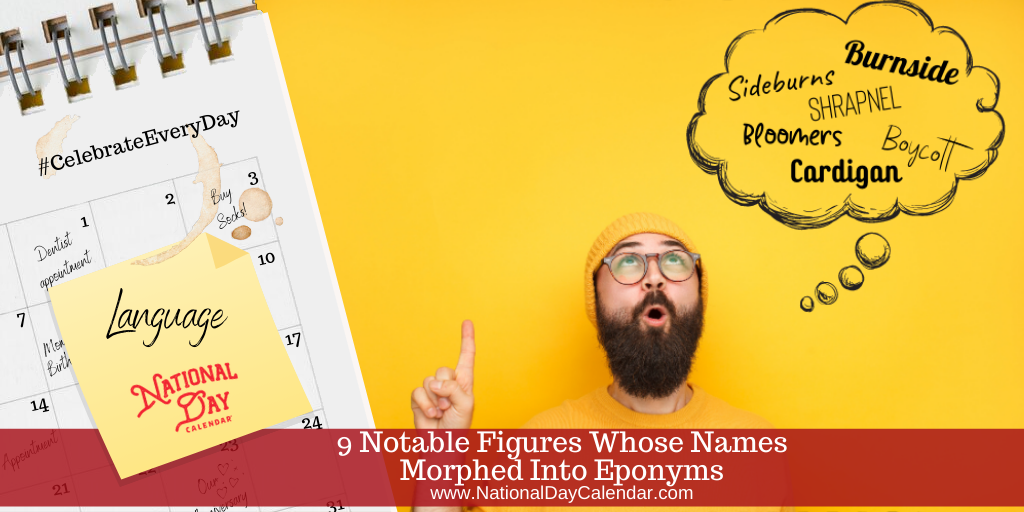 9 Notable Figures Whose Names Morphed into Eponyms – An eponym is a word that is derived from the person who invented it or made it famous. An example of an eponym is the word Fahrenheit. The word Fahrenheit comes from Daniel Gabriel Fahrenheit. The physicist invented the mercury thermometer and developed the Fahrenheit temperature scale. Eponyms can also be derived from the names of places, products, or objects. These kinds of eponyms include zipper, crockpot, Lego, coke, and diesel.

Explore these 9 Notable Figures Whose Names Morphed Into Eponyms:

You probably know that a cardigan is a knitted sweater that opens in the front. You may not know that this kind of sweater gets its name from James Brudenell, the 7th Earl of Cardigan. During the Crimean War, he commanded the Light Brigade as a lieutenant-general in the British army. The cardigan supposedly came about when Brudenell noticed he had burned off the tails of his knitted wool waistcoat in a fireplace.

Ambrose Burnside is a U.S. military officer who served as a general during the Civil War. He was well-known for his facial hair, which grew on the sides of his face. The style was originally called burnsides but eventually changed to sideburns.

The Italian explorer Amerigo Vespucci participated in voyages of the Age of Discovery. His journeys took place between 1497 and 1504. Vespucci, not Columbus, first realized America was not connected to Asia. A German Cartographer used the Latin form of Amerigo to name the new continents America.

Karl Marx is the next in our 9 Notable Figures Whose Names Morphed into Eponyms. He was a German philosopher and socialist revolutionary. In 1848, Marx published a famous pamphlet in the socialist movement called “The Communist Manifesto.” His political theories came to be known as Marxism.

British lieutenant Henry Shrapnel invented the shrapnel shell while a member of the Royal Artillery. European superpowers used the shells in World War I. After the Great War, armies stopped using shrapnel shells. However, the world shrapnel lives on. We use it as a generic word to describe shell fragments.

Amelia Jenks Bloomer was a women’s rights activist who wanted women to wear clothing they could easily move in. She was one of the first to wear loose-fitting knee-length pants in public. During the late 1800s, many people made fun of her progressive fashion statement. By the early 1900s, however, many women wore the comfortable bloomers as undergarments.

Captain Charles C. Boycott was a land manager in Ireland for John Crichton, the third Earl of Erne. Due to poor crops, Boycott offered farmers on the land a rent reduction of 10 percent. The farmers demanded 25 percent. When the Earl refused their offer, Boycott sent eviction notices to the homes. At that time, farmers could bid on an evicted neighbor’s land. A man named Charles Steward Parnell, the leader of the Irish National League (INL) suggested that the person bidding on their neighbor’s land be shunned. He also suggested shunning Boycott and those who worked for him. The plan worked, and Boycott was left with a large estate and no workers. After that, any business that disappointed the INL was boycotted.

The last in our 9 Notable Figures Whose Names Morphed into Eponyms series is the only one that brought us something to eat. The sandwich came about when John Montagu, the 4th Earl of Sandwich, asked his valet to bring him some meat between two slices of bread. Montagu was an 18th century English aristocrat.

What eponym do you use? Eponyms are numerous and fascinating to explore. Tell us which ones are your favorites.