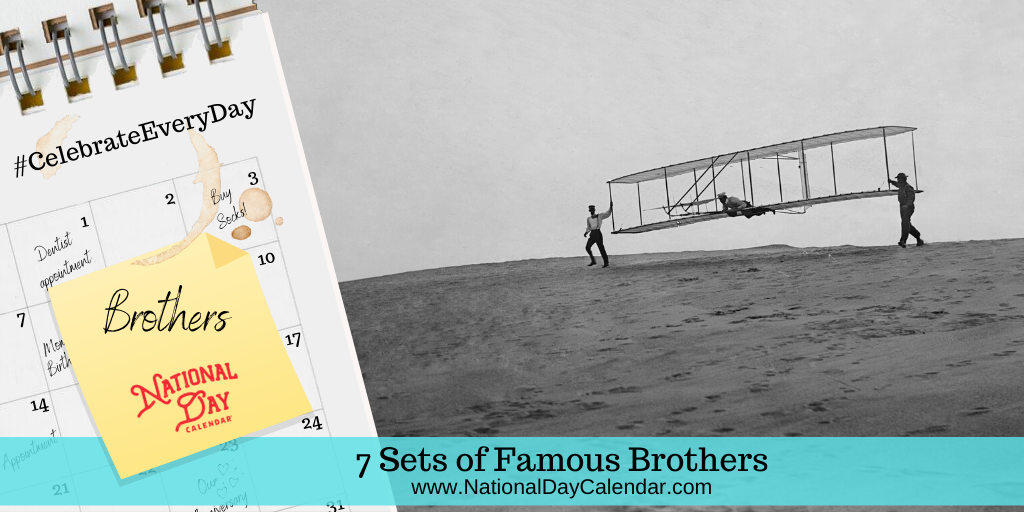 7 Sets of Famous Brothers – According to Biblical history, the first siblings on earth were a pair of brothers. You may have heard the story of Adam and Eve’s sons, Cain and Abel. You might have also heard that it didn’t end well for the first brothers in human history. According to the book of Genesis, Cain murdered Abel, and then lied to God about it. Thankfully, most brothers avoid taking sibling rivalry to this level. Many brothers get along quite well, like these seven sets of famous brothers.

Wilbur Wright was born near Millville, Indiana, in 1867. Four years later, his brother, Orville, was born in Dayton, Ohio. Famously known as the Wright brothers, the two invented the first motor-operated airplane. Not only were they the first to find success in motorized flight, but they also built and flew the first one. The flight took place on December 17, 1903, near Kitty Hawk, North Carolina.

Jacob Ludwig Karl Grimm, born in 1863, and Wilhelm Carl Grimm, born in 1859, are better known as the Brothers Grimm. The German academics collected and published folklore during the 19th century. They didn’t actually write fairy tales, however. Instead, they are credited for preserving and putting to paper the many oral stories that were passed down from generation to generation. Some of these fairy tales include Rapunzel, Cinderella, Snow White, Hansel and Gretal, and Little Red Riding Hood.

Chico, Harpo, Groucho, Gummo, and Zeppo were the stage names of the five brothers who made up the famous comedy act known as the Marx Brothers. The brothers were born in New York City to Jewish immigrants from Germany and France. From 1905 to 1949, the Marx Brothers found success in a theatrical genre called vaudeville. They performed on Broadway and in motion pictures.

The Manning brothers are among the greatest sets of siblings in sports history. Their dad was NFL quarterback, Archie Manning. Peyton Manning was born in 1976 and won two Super Bowls. He played for the Indianapolis Colts and the Denver Broncos. Eli Manning was born in 1981 and spent his entire career with the New York Giants. Like his brother, Eli also won two Super Bowls.

The Hemsworth brothers are both actors from Australia. Chris Hemsworth was born in 1983. He has appeared in many movies but is best known for his role as Thor in the Avengers movies. Chris is one of the highest-paid actors in the world. His younger brother, Liam, was born in 1990. Among other films, Liam starred in The Last Song, where he met famous singer and actress, Miley Cyrus. Their marriage ended after just one year.

Prince William and Prince Harry are the sons of Charlies, Prince of Wales, and the late Diana, Princess of Wales. William was born on June 21, 1982, and is second in the line of succession to the British throne. Prince William is married to Catherine (Kate) Middleton. They have three children. Prince Harry, Duke of Sussex, is a little more complicated than his elder brother. Harry was born on September 15, 1984. In 2018, he married American actress Meghan Markle. They have one child. In 2020, the couple announced they were leaving the Royal family. Harry and Meghan currently reside in Canada.

If you’re a pop music fan, you have likely heard of Kevin, Joe, and Nick Jonas. They formally formed their group, the Jonas Brothers, in 2005. At the time, Kevin was 17, Joe was 15, and Nick was 12 years old. Since their formation, the trio of brothers have toured the world, sold millions of albums, won multiple music awards, and have appeared in film and television.