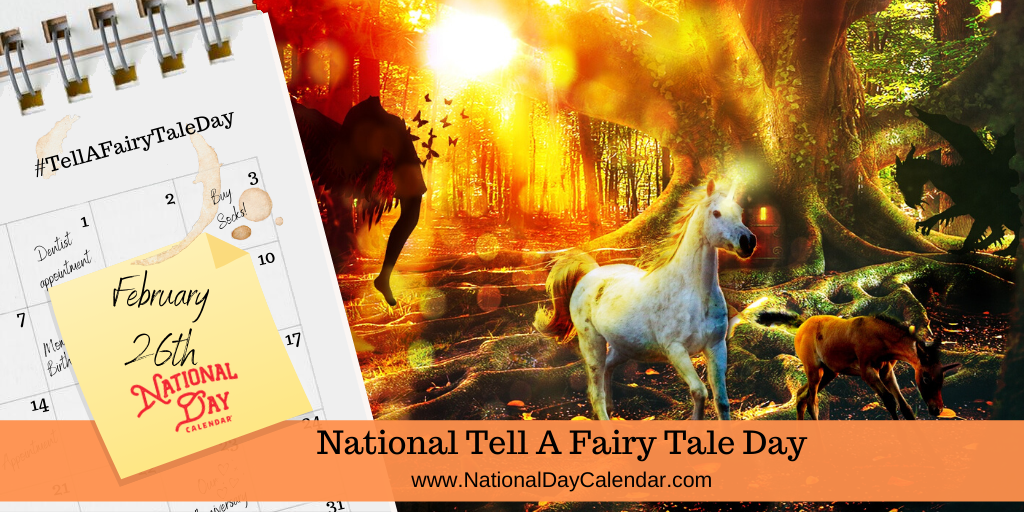 On February 26th, have a happily ever after kind of day. It is National Tell A Fairy Tale Day!

What were once oral histories, myths, and legends retold around the fire or by traveling storytellers, have been written down and become known the world over as fairy tales.

The origins of most fairy tales would fail today’s standards of the Association of Fairy Tales. They told unseemlily tales and would be rated as inappropriate for children. Most traveling storytellers told fairy tales with dramatic detail to make children behave, teach a lesson or pass the time much like ghost stories around a campfire today.

Many of the stories have some basis in truth. For example, some believe Margarete von Waldeck, the daughter of the 16th century Count of Waldeck, inspired the story of Snow White and the Seven Dwarfs. The area of Germany where the family lived was known for mining. Some of the tunnels were so tight they had to use children – or small people such as dwarfs – to work the mines.

Margarete’s beauty is well documented, and her stepmother sent her away. Margarete also fell in love with a prince but mysteriously died before she could have her happily ever after.

As the stories evolved, they took on a more magical quality with fictional characters such as fairies, giants, mermaids and gnomes, and sometimes gruesome story plots.

Toes cut off to fit into a slipper, a wooden boy killing his cricket, or instead of kissing that frog prince his head must be cut off, but those are the unrated versions.

The brothers Grimm collected and published some of the more well-known tales we are familiar with today. Jakob and his brother Wilhelm set out on a quest to preserve these tales at a time in history when a tradition of oral storytelling was fading. In 1812, they published their first volume of stories titled Household Tales. Their stories’ darker qualities were clearly meant for an adult audience.

Rumpelstiltskin is one of the tales they collected. Several other versions exist and the little man claimed many different names across Europe. From Trit-a-trot in Ireland to Whuppity Stoorie in Scotland,  Rumplestiltskin makes it difficult for historians to identify him.

While some storytellers have a long and sometimes ancient history such as Aesop (The Fox and the Goose, The Ant and the Grasshopper), others are more recent like the Grimm brothers.

First published in 1829, Hans Christian Andersen brought to us written versions of the Princess and the Pea, The Ugly Duckling, The Little Mermaid, and many more. Where Grimm’s tales could take on a darker cast and unmistakably written with adults in mind, Andersen’s stories are sweet and warm.

National Tell A Fairy Tale Day encourages you to tell a fairy tale or two. If you think you don’t have a fair tale to tell, you might be wrong. We’ve told a few in our day, so we have a few tips to share with you.

Share your favorite fairy tale with friends and family. Try relating them from memory as this has long been a tradition.  Visit a library or local bookstore for storytime.  Use #TellAFairyTaleDay to post on social media.

You can also learn more about your favorite fairy tales in 5 World-Favorite Fairy Tales and the Stories Behind them.

Within our research, we were unable to find the creator or the origin of National Tell A Fairy Tale Day.

Q. What is the purpose of a fairy tale?
A. Fairy tales serve many purposes but one of the main reasons for fairy tales is to teach a lesson. By the end of the story, the moral is clear.

Q. What are some of the morals fairy tales teach?
A. Fairy tales often present moral dilemmas for the characters to face. Some of them may be about:

February 26th Celebrated (and Not So Celebrated) History

The U.S. Patent Office issued patent no. 534,840 to Michael Joseph Owens for a glass-blowing machine. Later that same year, Owens would co-found the Owens Bottle Machine Company in Toledo, Ohio. He also filed several other patents for bottle making.

The Palace Theatre in London introduced the public to Kinemacolor with a showing of 21 short films. George Albert Smith created the process for adding color filters to film.

February 26th Celebrated (and Not So Celebrated) Birthdays

As imaginative and romantic as Victor Hugo was, he probably never conjured up any of the cinematic productions of his novels and plays. What might the French author of sweeping epics like Les Misérable and gothic works like The Hunchback of Notre Dame have thought of the modern interpretations?

Today, they are probably more fashion statements than workwear. They come in more styles and colors than Starbucks can come up with for coffee choices. In 1873, tailor Jacob Davis approached Levi Strauss with a proposal after creating a pair of reinforced waist-length overalls from the fabric Strauss had sold him. Less than a century later, they became the stylish wardrobe necessity every teenager required. Fashion designers elevated the humble blue jean to haute couture while the rest of us wrote love letters to our favorite old pair of jeans that fit perfectly.

Anyone who loves Rock ‘n’ Roll needs to thank the man who bellied up to the piano and called himself “The Fat Man” in 1949. He’s also known for the songs “Ain’t That a Shame” and “Blue Berry Hill.” Fats Domino’s unique rhythm and enthusiastic personality drove an entirely new genre of music.

If an artist ever sang about who he was, Johnny Cash did. He sang about sinners and redemption, soldiers and drifters, and country boys. If Cash didn’t speak to you through his music, you’ve not found the right song yet.

In 2001, the first military woman in space performed the longest spacewalk with astronaut James Voss. She began her distinguished career in the Air Force and became an astronaut in 1991.