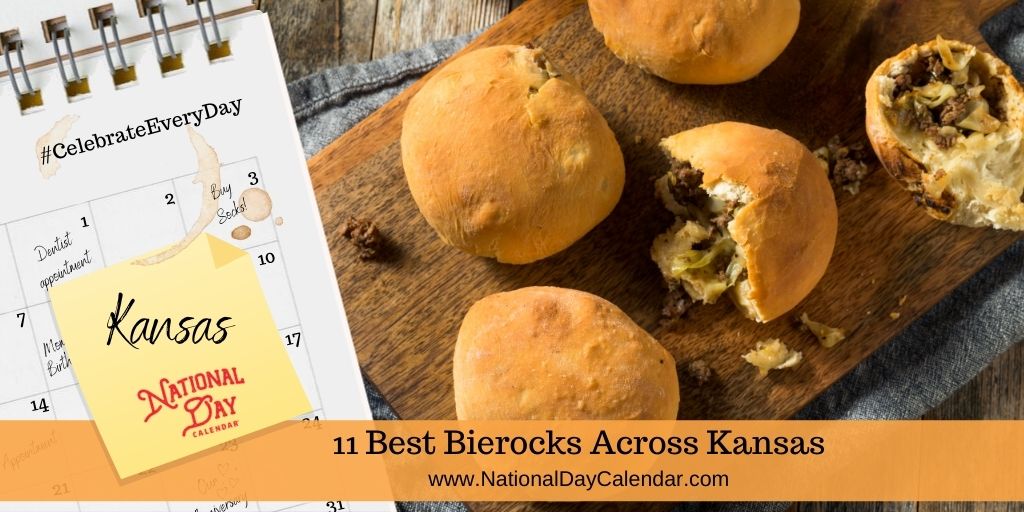 When you’re hungry the first thing to come to mind probably isn’t the word “bierock.” It doesn’t even sound like food. But it is. A cross between a sandwich and a hand pie, this tasty Eastern European stuffed roll is a Kansas staple. It’s made with ground beef, cabbage, and onions stuffed inside a yeast roll. An ethnic group known as the Volga Germans settled along the Volga River in western Russia and began immigrating to North and South America around 1875. Many of them settled in Kansas, and they brought with them the bierock. Whether you live in Kansas, are visiting, or just passing through, you’ll want to try these 11 Best Bierocks Across Kansas.

On your way through the Land of Oz and the Oz Museum, stop in on a Saturday at the Friendship House in Wamego for their made-from-scratch and made fresh bierocks and soup.

Fuel up on Becky’s Bierocks in St. Francis before heading out to the Arikaree Breaks. Drive along the public roads and explore the rugged territory of ravines and loess. The bakery offers three kinds of bierocks by the dozen. So, order ahead and for a crowd.

Once known as the Bierock Kitchen, this little drive-thru restaurant harkens back to the days of Big Boy. Re-opened in 2007 by Mary Moran, the restaurant offers three kinds of bierocks including a ham and cheese version.

When bierock is in the name of the restaurant, you expect to see some specialty bierocks. And Want Bierock offers exactly that! Along with their piping hot coffee and espressos, they offer a breakfast bierock stuffed with potatoes, sausage, and sharp cheddar cheese. They also offer beef, chicken, and pork bierocks.

Hays and Wichita seem to be bierock havens. Gella’s offers an eclectic mix of menu items including the Smothered Bierock. The diner is set inside LB Brewing and offers other German side dishes, including unique grebble.

Besides offering a variety of cakes, pies, and rolls, Augustine’s Bakery also offers several German favorites including kuchen, spitzbuben, and of course, bierocks.

Bierocks are also known as runzas in some parts of the Midwest. At Runza, the menu offers nine different bierock/runza sandwiches plus miniture runzas. The business began in 1949 and has since grown into a franchise with several locations across Nebraska, Kansas, Colorado, and Iowa.

Offering traditional bierocks as part of their menu, CB Baked Goods also offers one of its own creations called a bolso. After spending an afternoon at the Marion Reservoir, a bierock from CB Baked Goods will hit the spot!

While in Abilene, visit the Dwight D. Eisenhower Presidential Library and Museum and then stop by Amanda’s Bakery & Bistro to fuel up on delicious soup, sandwiches, and salads. And don’t forget to order a classic bierock.

If you’re looking for a vegan-friendly bierock, then head to Andover, KS. Bierocks Babe offers both a traditional and vegan bierock. And don’t forget to order baklava, too.