National Pretzel Day on April 26th recognizes one of America’s favorite snacks.  A bag of nice crunchy, salty pretzels or a big, warm, soft, cinnamon pretzel is the question of the day.  Either one is an excellent choice.

There are a few different accounts of the origin of the pretzel.  Most people agree that it does have a Christian background, and they were developed by the monks.  According to The History of Science and Technology, in 610 AD, “an Italian monk invents pretzels as a reward to children who learn their prayers.  He calls the strips of baked dough, folded to resemble arms crossing the chest, pretiola (little rewards).”

Another source puts the invention in a monastery in southern France. The looped pretzel may also be related to a Greek Ring bread from the communion bread used in monasteries a thousand years ago.  In the Catholic Church, pretzels had a religious significance for both ingredients and shape. The loops in pretzels may have served a practical purpose; bakers could hang them on sticks, projecting upwards from a central column, as shown in Job Berckheyde’s (1681) painting.

The Pennsylvania Dutch immigrants introduced pretzels to North America in the 19th century.  At this time, many handmade pretzel bakeries populated central Pennsylvania, and their popularity quickly spread. In the 20th century, soft pretzels became very popular in areas such as Philadelphia, Chicago, and New York. 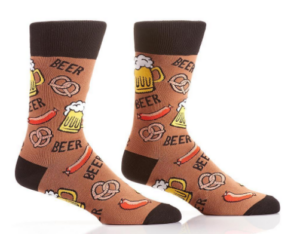 Sink your toes into a warm, toasty pair of socks for National Pretzel Day! We have just what you’re looking for in our store.