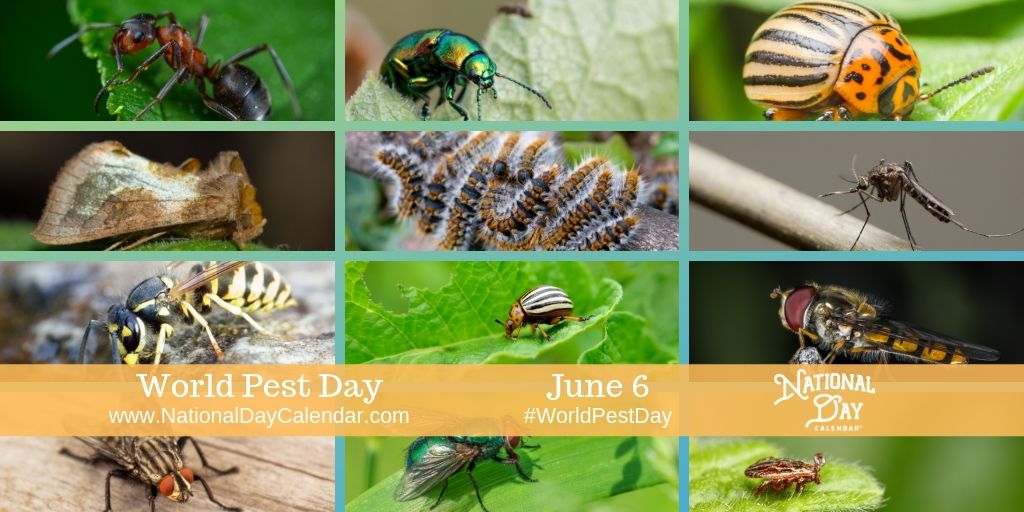 Every June 6 is World Pest Day or sometimes called World Pest Awareness Day. The day was created to raise awareness of how pest management helps preserve the quality of life for you and your loved ones.

It’s estimated 900-million insects types can be pests. They fall into four different categories based on body types: 1. beetles; 2. flies; 3. moths and butterflies; and 4. ants, bees and wasps.

People have been trying to get rid of pests for as far back as history can trace. Cave dwellers probably swatted mosquitoes or used smoke to ward off the bloodsuckers.

As far back as 2500 BC, people used sulfur compounds to control mites and insects.

In 1200 B.C., the Chinese deployed predatory ants against pests such as beetles and caterpillars.

One of the first publicly advertised pest control companies was the 1690 company H. Tiffin and Son Ltd. in London. The company promoted rat and bed bug control using methods and chemical compounds they invented. Their trademark was “Bug Destroyers to Her Majesty and the Royal Family.”

Rats are one of the hardest pests to control. Methods to control rats vary from chemicals, plant extracts, prayers, chants, terrier dogs, and music. Ratsbane was one of the first chemicals used. Barbers sold it in the Middle Ages. Then it became a popular item sold by street vendors.

Vermin exterminators eventually emigrated to the United States from about 1840 to 1930.

At least once a quarter, have a professional pest controller treat your home property. It will help prevent pests from becoming a problem.

You can use consumer products to control pests between professional treatments.

Use sticky traps and live catch traps to monitor and catch pests.

Follow on social media with #WorldPestDay to get ideas on pest control methods.

The inaugural World Pest Day ceremony was held at the Beijing Hotel on June 6th, 2017.