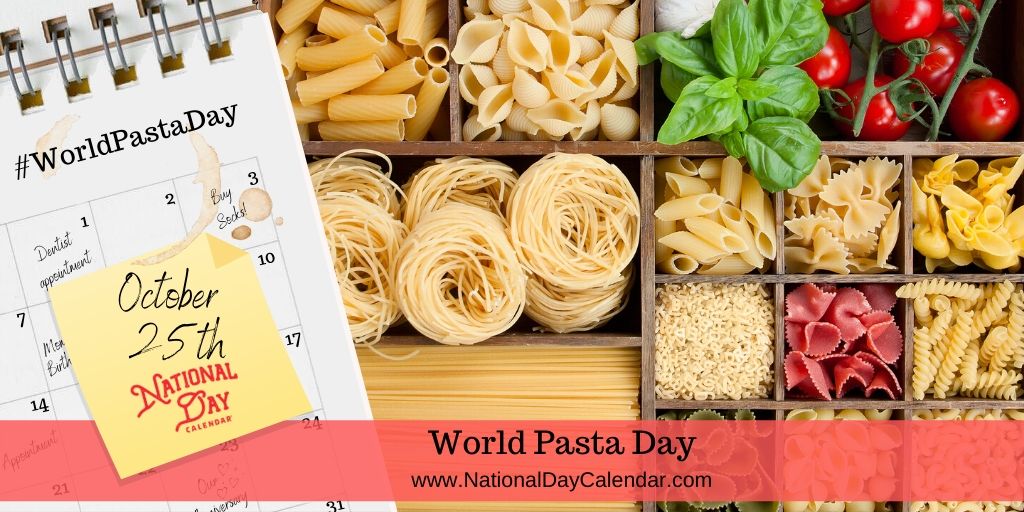 October 25th marks World Pasta Day. The day celebrates one of the world’s favorite and most versatile foods.

You have probably eaten pasta at one time in your life. Chances are, you eat it several times a week. But what exactly is pasta? This carbohydrate-rich food is made from unleavened dough that comes from durum wheat flour. The flour is mixed with water or eggs and then formed into sheets. Pasta is cooked by either boiling or baking.

One of the most amazing things about pasta is that there are over 350 kinds! Some of the most well-known types of pasta include:

These types of pasta, and many others, are used in a variety of recipes. Many put pasta in their soups and salads. Others use pasta in casseroles. When eaten alone, pasta is usually topped with different cheeses and sauces. Pasta can be eaten in so many different ways. No wonder it’s one of the most versatile types of food in the world.

The word pasta actually translates to paste in Italian. Despite this fact, pasta may actually have its roots in China instead of Italy. Food historians believe modern-day pasta came from ancient Asian noodles. Some believe that Marco Polo brought pasta to Italy from China. This probably isn’t true. It is unclear how pasta reached Europe from Asia. When pasta reached the Mediterranean, durum flour became the wheat of choice. Thanks to pasta’s affordability and long shelf life, it quickly became a staple in Italian culture.

It’s believed that Spanish explorers brought pasta to America. Thomas Jefferson is credited for making pasta popular in this country. While in Paris from 1784 to 1789, Jefferson ate a lot of macaroni. He thought it was so delicious, he brought two suitcases full of pasta back home with him. Pasta became even more common in the United States when Italian immigrants came here during the late 19th century.

Every year the International Pasta Organization (IPO) holds a variety of events throughout the world. The goal behind these events is to maximize the promotion of this nutritious and sustainable food. Authoritative experts also discuss the cultural, economic, scientific, and gastronomic aspects of pasta.

Host a pasta party and invite your friends to bring their favorite kinds of pasta. Enjoy tasting and swapping pasta recipes. You might even find a few on the National Day Calendar® recipe pages. Other ways to celebrate include: