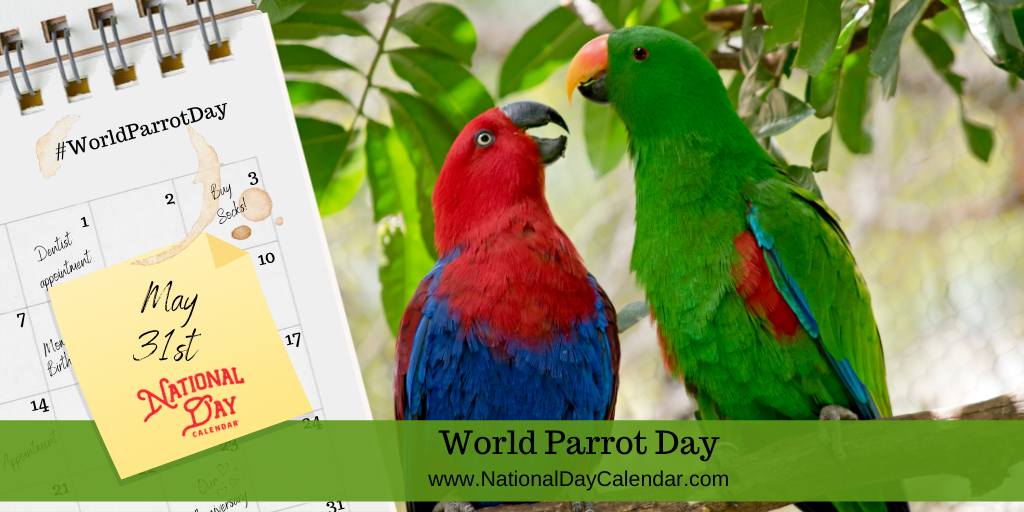 Every year on May 31st, World Parrot Day highlights the threat to wild and captive parrots throughout the world. It’s also a day to learn more about this intelligent and magnificent bird.

When you picture a parrot, you probably think of a colorful bird that talks or mimics sounds. Both of these things are true of most parrots, but not all of them. Even the parrots that can’t talk are still considered intelligent. The most intelligent parrot is the African grey parrot. A particular bird of this species, named Alex, was believed to have the intelligence of a 5-year old. Alex knew colors, shapes, and over 100 English words. Besides the African grey parrot, other popular types of parrots include the cockatiels, Fischer’s lovebirds, monk parakeets, cockatoos, Amazon parrots, and macaws.

Currently, there are about 350 species of parrots around the world. Nearly half of these species are endangered. About a quarter of all parrot species are critically endangered. The destruction of habitats, hunting, and the illegal trade of wild parrots are all reasons certain species have become endangered.

Here are some more interesting facts about parrots:

One more wild and crazy fact is that a group of parrots is called a pandemonium. This is quite fitting, considering the word pandemonium means wild and noisy.

The World Parrot Trust (WPT), located in London, organizes a variety of events on this day. Many of these events take place at zoos across the UK. Zoos in other countries, such as the United States and New Zealand also encourage the public to visit their parrot exhibitions.
To participate:

Share your favorite photo, video, or story of a parrot on social media with #WorldParrotDay

The World Parrot Trust organized the first World Parrot Day in 2004. On May 31st, the WPT held a parrot rally in Trafalgar Square in London. From there, organizers and supporters marched toward Downing Street. They then handed a petition that contained 33,000 signatures to the Prime Minister of the UK. The petition asked for a complete ban on importing wild parrots into the European Union. In 2007, the EU Commission announced a permanent ban on wild bird imports, including parrots.