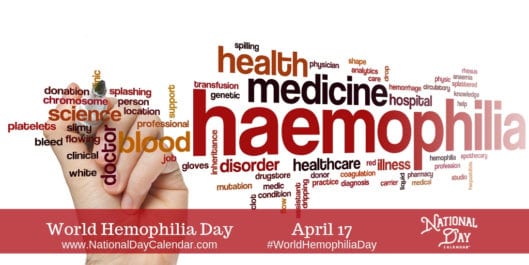 World Hemophilia Day is always observed on April 17. Sometimes it is also called World Bleeding Disorders Awareness Day. The focus of the day is to identify and to reach out to new members of the bleeding disorders community.

Hemophilia is a bleeding problem. People with hemophilia do not bleed any faster than normal, but they can bleed longer than usual. Their blood does not have enough clotting factor. Clotting factor is a protein in blood that controls bleeding. The condition affects about 1 in 10,000 people.

Since hemophilia is a genetic condition, it is usually inherited, meaning that it is passed on through a parent’s genes. Genes carry messages about the way the body’s cells will develop as a baby grows into an adult. They determine a person’s hair and eye color, for example.

Light a lamp in your home, office or even a local landmark red to honor all those with a bleeding disorder and raise awareness for World Hemophilia Day.

Invite a specialist from a local hemophilia treatment center to speak to your group, class, or brown bag lunch

World Hemophilia Day was started in 1989 by the World Federation of Hemophilia (WFH) which chose to bring the community together on April 17 in honor of WFH founder Frank Schnabel’s birthday.