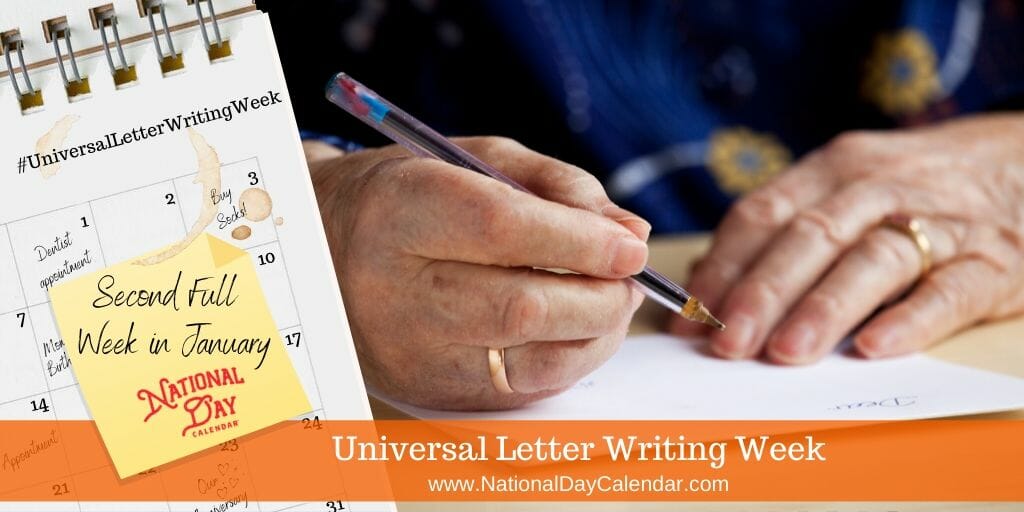 Universal Letter Writing Week during the second full week of January encourages us to take up pen and paper and write to someone this week.

With the advancement of technology, letter writing is slowly becoming a lost art. To keep up with the hustle and bustle of life, people prefer quicker ways of communicating. Indeed, e-mail, text, and instant messenger are often more convenient. However, there is nothing like getting a good ‘ol fashioned letter in the mail.

Queen Atossa of Persia wrote the very first handwritten letter in 500 B.C. How exactly were letters written in ancient times? They wrote on the leaves of plants and the bark of trees. Papyrus, a type of plant, was similar to thick paper. Because it was such a popular material for letter writing, it became scarce. New materials, including animal skins, were used to write letters, too. Reeds dipped in ink were some of the first pens. As early as the 14th century, letter writers used lead pencils to write their missives. Also, in the 14th century, linen rags were used to make paper. The art of letter writing flourished during this time.

The first letter to have been mailed with a stamp was written in 1840 in Great Britain. In the United States, the first postage stamp was issued in 1847. Prior to the invention of the stamp, the person receiving the letter paid the postage. In the U.S., the first 5-cent stamp featured Benjamin Franklin, who was the first postmaster. The first 10-cent stamp featured George Washington. The 5-cent stamp was used for letters weighing less than ½ ounce. These letters traveled up to 300 miles. However, the 10-cent stamp was for letters traveling more than 300 miles. At one time it took 14 days for a letter to be delivered to another city just 100 miles away.

Talk about snail mail! Today, it takes 2 to 3 days for the United States Postal Service to deliver a letter. Even though writing materials and mail services have improved greatly through the years, the art of letter writing is at an all-time low. Fourteen percent of people in the U.S. have never written a letter. Eighteen percent have never given a hand-written thank-you note. If you’re someone who has never written a letter, this week is the perfect time to write your first one!

It’s easy to take part in this fun week! Simply think of someone (or a few people) to write to. It could be an old friend you have lost contact with. Or maybe, it could be a grandparent or family member who lives far away. Surprise your neighbor across the street who you never get to see. You could even write a letter to a different person each day of this week. Whoever it is, they will be overjoyed to receive a letter in the mail.

If you’re an educator, do a letter-writing exercise in the classroom. For parents, it’s a great way to teach your kids how to write a letter. You could even show them letters you have kept through the years. No matter how you observe it, share #UnicersalLetterWritingWeek on social media.

Educators, visit the National Day Classroom for projects designed to help you and your students to Celebrate Every Day.

National Day Calendar was unable to identify the founder of this observance.