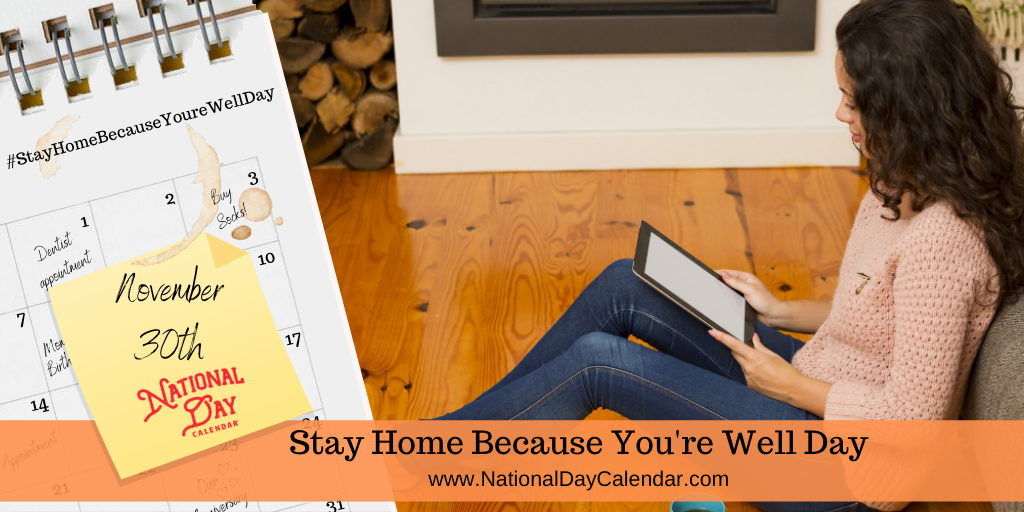 On November 30th, Stay Home Because You’re Well Day gives us an excuse to stay in for the day. We all need a break, and it is nice to take it when we are healthy and can enjoy it. That said, if everyone in the working world took the same day to stay home because we were well, chaos would ensue.

We all need time alone. It is essential to disconnect from our daily routines. Sometimes a checklist of things we need to do calls to us. Others have no idea what we’d do left to our own devices.

Being home when we are healthy can come with a sense of accomplishment, too. We can tackle tasks we’ve been wanting to complete for a while. It can also be an opportunity for some much-needed relaxation. Everyone sees a healthy day off differently. Use it as you see fit.

Stay Home Because You’re Well Day has no agenda other than to spend a healthful day at home. But the opportunities remain endless! What you do with it is up to you.

Stay home and use #StayHomeBecauseYoureWellDay to post on social media.

November 30th Celebrated (And Not So Celebrated) History

The U.S. Patent Office issued patent No. 22,186 to John L. Mason for improvements in screwneck bottles. His invention became the most popular glass jar used for food perseveration and his name became synonymous with canning.

Inventor Alexander P. Ashbourne was granted U.S. patent No. 170,460 for a biscuit cutter. His invention included molds of various shapes and allowed multiple biscuits to be cut out at once.

Ann Hodges of Sylacauga, Alabama is struck by a 9-pound meteorite that crashed through the roof of her living room. It’s the only known instance of a meteorite striking a person.

The English rock band Pink Floyd releases its 11th studio album, The Wall. The rock opera featured songs like “Another Brick in the Wall,” “Is There Anybody Out There,” and “Comfortably Numb.”

November 30th Celebrated (And Not So Celebrated) Birthdays

The celebrated photographer is best known for writing and directing the film The Learning Tree. It was the first film for a major studio to be directed by an African American. In 1971, Parks directed the film Shaft based on the book by Ernest Tidyman.

The iconic radio and television personality hosted American Bandstand for more than 30 years. In 1957, he launched Dick Clark Productions. For 40 years, he was a perennial staple on Dick Clark’s New Year’s Rockin’ Eve. His final appearance was in 2012.