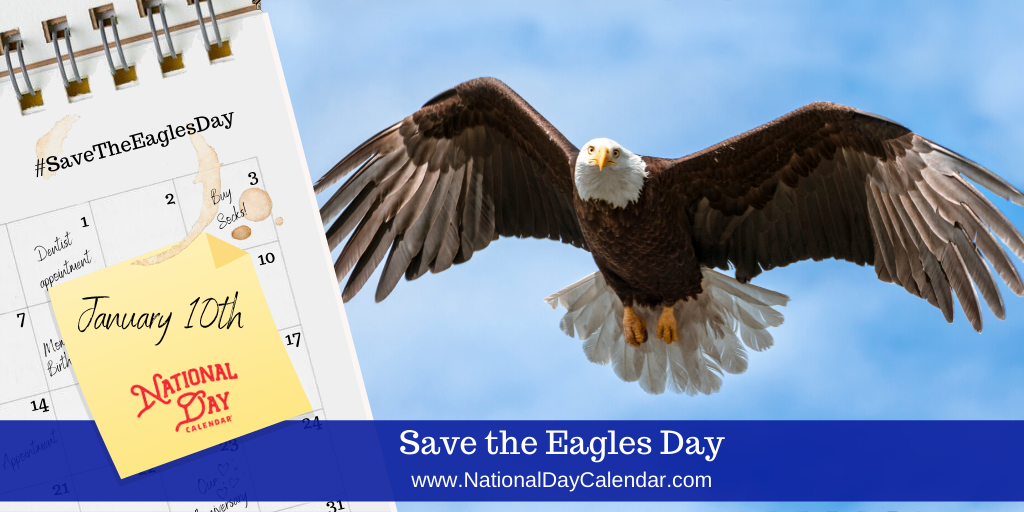 SAVE THE EAGLES DAY

Each year on January 10th, Save the Eagles Day reminds us of the majestic raptors that soar above the Earth – whether they are well populated or endangered. Due to the work of scientists and the public, the bald eagle was removed from this list in June 2007. Poaching, pesticides, and other dangers continue to threaten eagle populations.

While the day started as a way to save a specific pair of bald eagles and to raise awareness about the species, the observance has grown to encompass all species of eagles. Approximately 60 species of eagles populate the world. Most of the species are found in Eurasia and Africa. North, Central, and South America and Australia only account for about 14 species. However, no eagles are found in Hawaii. The most common species in North America are the bald and golden eagles.

Eagles are powerful birds of prey. An eagle’s sharp sense of sight paired with powerful muscles, piercing talons, and beak, make them primed for the hunt. They are also monogamous, mating for life.

Learn more about eagles. Watch documentaries or read about them. Visit an aviary or a bird sanctuary. We have provided a couple of books to review, too. Participate in preservation and conservation in your area, too.

SAVE THE EAGLES DAY HISTORY

In 2015, Save the Eagles Day originated in the Village of Ridgefield Park, New Jersey. The day is the result of an effort to save a pair of nesting bald eagles near the community. Late in 2014, Skymark Development Corp of Paramus brought a study forth arguing that a landfill near where the eagles nested posed health risks. The nesting pair, fondly named Alice and Al, had nested along Overpeck Creek since at least 2011. When the developer proposed a solution that included removing the tree the eagles nested in, the community and the Bergen County Audubon Society organized Save the Eagles Day on January 10, 2015.

Eventually, an agreement was formed to preserve an area of the land as an eagle park. Alice and Al continued to live out their days in Ridgefield Park and fly over the residents there. Read more about the environmental success of the area and about Alice and Al.