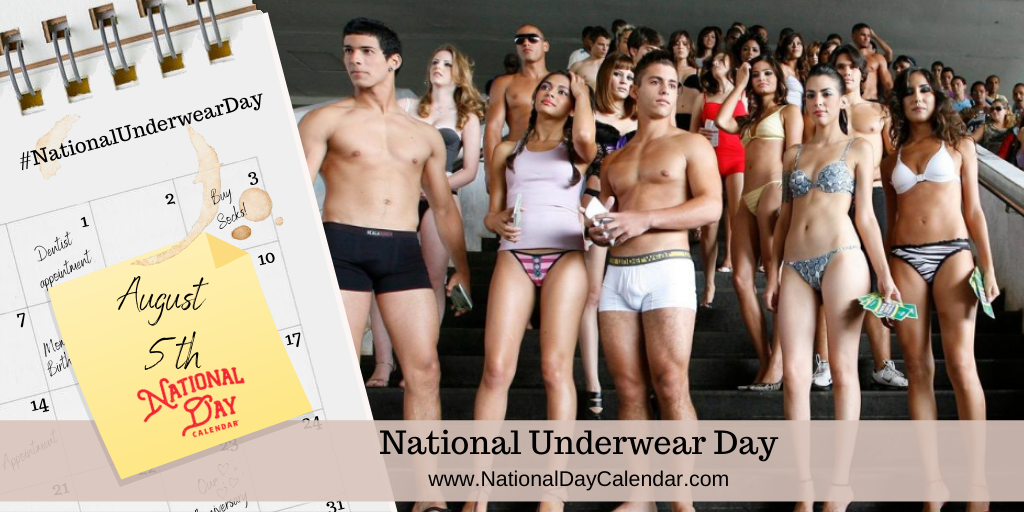 On August 5th National Underwear Day provides an opportunity to wear your favorite undergarments. Boxers. Briefs. Panties. Tighty-whities. No matter what you call them, our underthings provide a layer of comfort.

Many Americans have heard their mother’s warning. “Make sure to always wear clean underwear. You never know when you will be in an accident!” While there are other reasons to wear fresh underwear, this is the one that often comes to mind.

Underwear is the layer of clothing worn closest to the body and under the outer clothing. It protects clothing from sweat. Underwear also provides the wearer protection from cold and chafing. Another benefit to underwear includes support and body shaping.

Most of us see these intimate items of our wardrobe as necessities. However, others utilize them as accessories. Since fabrics allow underwear to be designed for specific needs, a wide variety are made for sports and specific climates. Depending on preference, some select garments for modesty or to feel alluring.

A 2012 survey by Elitedaily.com reveals that the average woman owns 20 pairs of underwear – for every day. Then, they own 14 extra pairs for special occasions.

In 2018, retailers reported an increase in the popularity of nude colors. Instead of bright fashion colors or sultry bedroom styles, shoppers sought something neutral. Skin blending shades that disappear under sheer outer clothes won consumers’ dollars.

Embrace your body image. Use #NationalUnderwearDay to post on social media. If you are the bashful type, just wear your underwear around the house when no one is home. One can also celebrate by watching the 1983 romance comedy Risky Business starring Tom Cruise and Rebecca De Mornay.

While you’re wearing your favorite underwear, consider these brief ways to celebrate. You might even reveal a naked truth.

August 5th Celebrated (and Not So Celebrated) History

Cyrus W. Field’s idea to lay a telegraph cable across the Atlantic Ocean comes to fruition. On this day, the final section of the cable was laid.

Congress enacts the Revenue Act and it is signed by President Abraham Lincoln. The act allows the collection of income tax for the first time in the United States.

Major League Baseball broadcasts its first game over the radio. The Pittsburgh Pirates shut out the Philadelphia Phillies.

Magician and escape artist Harry Houdini attempts his most challenging escape. However, after spending 91 minutes in a casket underwater, he signals to his assistant to release him.

American Bandstand broadcasts nationally for the first time. Hosted by Dick Clark, bands would lipsynch their music to a dancing crowd of teenagers.

At the 27th Academy Awards, From Here to Eternity wins Best Picture.

Actress and singer Marilyn Monroe dies. Monroe was known for film hits such as Some Like It Hot, Gentlemen Prefer Blondes, and The Seven Year Itch.

Launched on March 27, 1969, Mariner 7 flies past the planet Mars. While the spacecraft was the second craft to fly by Mars, it used information from the first flyby to cataloged additional information scientists were seeking.

The U.S. version of the improvisational comedy show “Whose Line Is It Anyway” debuts on ABC.

August 5th Celebrated (and Not So Celebrated) Birthdays

The first president of Brazil, Fonseca was a military leader who led a coup to end the Empire and establish a republic on November 18, 1889. The coup took place after the Empress, Princess Isabell abolished slavery in 1888. However, Fonseca served less than a year, making him the first Brazilian president to resign.

The astronaut is known for being the first human to step foot on the moon. On July 20, 1969, Armstrong and fellow astronaut, Buzz Aldrin landed on the moon. Their feat was broadcast around the world.

The American hockey player and coach is best known for leading the U.S. Olympic hockey team to gold. Known as the “Miracle on Ice,” the team upset the Soviets during the 1980 Winter Olympics in Lake Placid, NY.

Best known for her role as Jennifer Marlowe on the sitcom WKRP in Cincinnati, Anderson was also married to actor Burt Reynolds. The WKRP character was the AM radio station’s receptionist.

Now the head coach for Georgetown University’s men’s basketball team, Ewing began his professional career as a first-round pick in the NBA draft. He played the majority of his career with the New York Knicks. In 1992, he also played as a member of the U.S. Olympic Dream Team.

Hoffman launched the internet’s largest professional network, LinkedIn, in 2002. Since then, the social media network has grown to 575 million users.