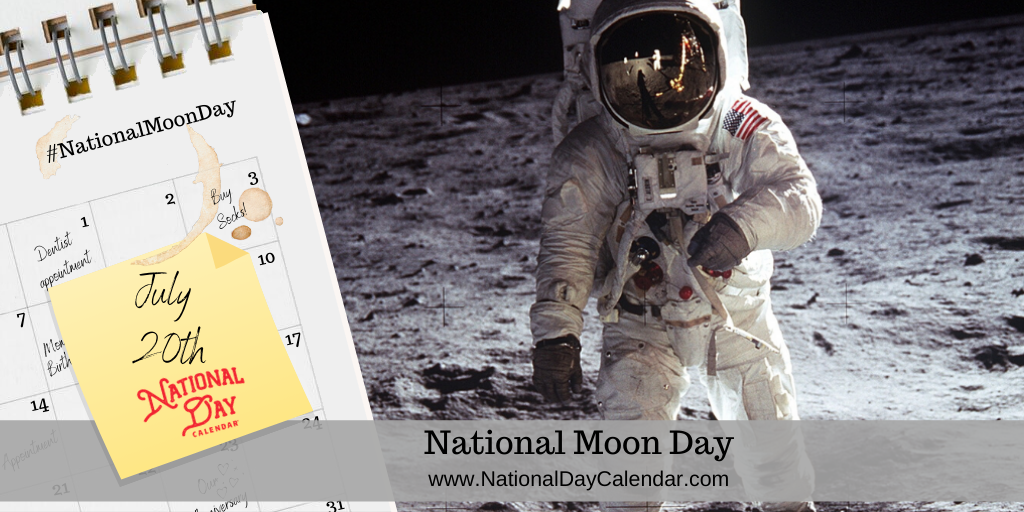 National Moon Day on July 20th commemorates the day man first walked on the moon in 1969. NASA reported the moon landing as being “…the single greatest technological achievement of all time.”

On July 20, 1969, Apollo 11 carried the first humans to the moon. Six hours after landing on the moon, American Neil Armstrong stepped onto the lunar surface. He spent two and a half hours outside the spacecraft. Buzz Aldrin soon followed, stepping onto the lunar surface. After joining Armstrong, the two men collected 47.5 pounds of lunar material. Their specimens would make the journey back to Earth to be analyzed.

In the command module, a third astronaut waited. Pilot, Michael Collins, remained alone in orbit until Armstrong and Aldrin returned.

Caught up in the thrill of the adventure, millions of Americans watched the mission from Earth. Televisions around the world tuned in to the live broadcasts. The astronauts had a worldwide audience. As a result, all witnessed as Armstrong stepped onto the moon’s surface and described the event as “one small step for [a] man, one giant leap for mankind.”

When is Global Sleep Under the Stars Night?

Unquestionably, putting men on the moon became a tangible achievement in the space race. It placed the United States in a role to go forth and explore into the deeper reaches of the universe, too. In the months and decades that followed, NASA and the Soviets stepped up their missions.

The day doesn’t just celebrate the landmark mission. It also celebrates future missions. Private expeditions are taking humans further into space. Armstrong’s “one small step for man” inspired imaginations and sparked innovation, too, for generations to come. Even future moon missions are planned including manned landings.

National Moon Day opens up a lot of opportunities to explore and reminisce! Did you watch the first moon landing in 1969? How about the ones that followed? Share your memories of the moon landing. Set up your telescope and explore the moon’s surface. You can even explore the surface with a telephoto lens. As you rediscover the moon, start a discussion about space exploration. How does it impact our world today? Study the plans for future moon landings, too. What are your thoughts on more moon exploration?

While you’re celebrating, discover the people behind the moon landing. Share their stories and celebrate their achievements, too. You can also celebrate the day by reading books or watching documentaries about the Apollo 11 mission or those leading up to it:

Share your discoveries and stories using #NationalMoonDay on social media.

Enter Richard Christmas. He took up the baton by launching a “Chrismas Card” writing campaign. The Michigan native wrote to governors and members of Congress in all 50 states urging them to create National Moon Day. He achieved some success, too. By July of 1975, 12 states sponsored bills observing Moon Day.

Another modern-day supporter of National Moon Day is Astronomer James J. Mullaney. He knows a few things about the moon, too. As a former Curator of Exhibits and Astronomy at Pittsburgh’s original Buhl Planetarium, Mullaney is on a mission. He says, “If there’s a Columbus Day on the calendar, there certainly should be a Moon Day!” His goal is a federally recognized holiday.

In 2019, President Donald Trump proclaimed July 20th as the 50th Anniversary Observance of the Apollo 11 Lunar Landing. However, no National Moon Day has been declared.

Explore other out of this world celebrations:

July 20th Celebrated (and Not So Celebrated) History

The opening ceremonies for the first Special Olympics began in Chicago at Soldier Field.

Neil Armstrong and Buzz Aldrin become the first humans to land on the moon as part of the Apollo 11 mission.

Fifty-two years after the first moon landing, Wally Funk became the oldest person in space. Her original goal was to be the first woman in space, but during the space race, NASA required their astronauts to also have jet experience. At the time, very few women pilots were allowed to fly jet planes. But in 2021, during the race of the billionaires, Funk boarded Blue Origin’s New Shepard as a private passenger with Jeff Bezos and other passengers for a trip in space – one she’d been waiting for a lifetime to take.

July 20th Celebrated (and Not So Celebrated) Birthdays

In 1959, the American entrepreneur founded the pizza chain Little Caesars.

The award-winning actress is known for her musical talent. Some of her most popular roles were in the films Miracle on 34th Street, West Side Story, and Gypsy.

The award-winning Mexican American guitarist gained prominence with his band, Santana. His Latin-Rock fusion is one of the reasons he has won 10 Grammy Awards.

The American actor, rapper and producer is known for his roles in Fox’s House and the film Love & Basketball. He was most recently cast in the series Power Book III: Raising Kanan.