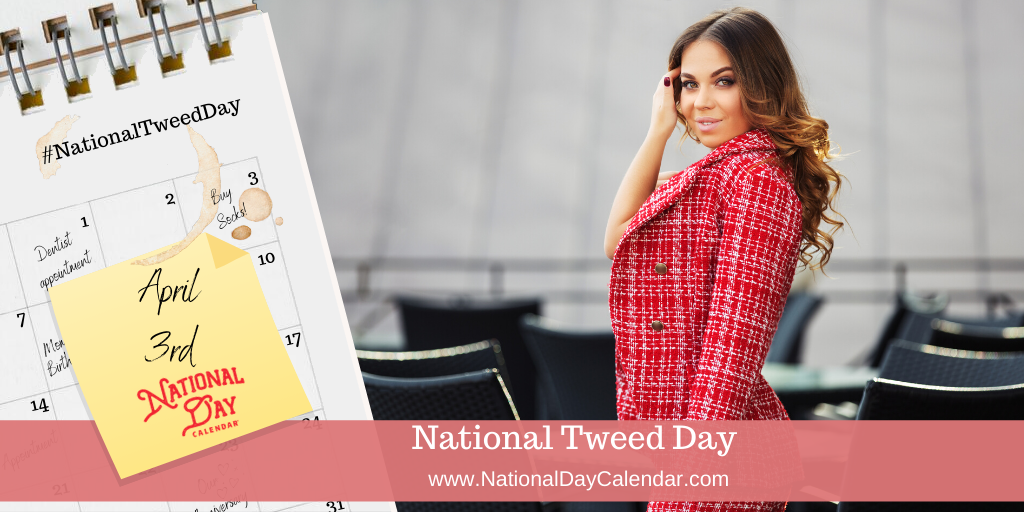 Some people think the observance celebrates the senator-turned-crook William “Boss” Tweed. Tweed was born on April 3, 1823. He was the wealthiest and most powerful politician of his time. While being considered the “poster boy” for political corruption, Tweed is still known by many as one of the most notorious politicians in American history. He died in 1878, in jail, after being caught with millions of dollars of stolen public money.

Others believe that National Tweed Day celebrates the fabric. Originally produced in Scotland, the durable textile was initially handwoven. While the rough, woolen cloth is sturdy, it is also known for being lightweight. The traditionally earthy colors blend well with the Scottish landscape, too. Different families of tweed fall into various categories and styles. The estate the tweet represents, the sheep from which the fabric is woven, and the patter all determine the particular kind of tweed it becomes. Famous characters who wore tweed include Sherlock Holmes, James Bond, and Professor Henry Jones (aka Indiana Jones).

Several actors have portrayed Boss Tweed in film, too. You may recognize Jim Broadbent for his portrayal of Tweed in Gangs of New York. The actor’s wardrobe may also contain a few pieces of tweed, too. One of his more notable tweed-wearing characters was Professor Horace Slughorn in the Harry Potter films.

While Vincent Price may be more well-known for other sinister characters, he also portrayed the notorious politician the musical Up in Central Park. The woolen textile didn’t make much of a stage presence, though. However, Price also voiced Professor Ratigan in the animated film The Great Mouse Detective. Based on the evil nemesis, Moriarity, from the Sherlock Holmes stories, we circle back to all things tweed.

Boss Tweed shows up on screen two other times. The actors who portrayed him were Philip Bosco and Edward Andrews. Neither the film (Liberty) or the television series (The Great Adventure) are available for viewing.

National Day Calendar continues to research the origins of this textile holiday.

Q. What is tweed made from?
A. Tweed makers use wool to make tweed.

Q. Are twill and tweed the same thing?
A. No. Twill is a type of weave and is one method used for making tweed.