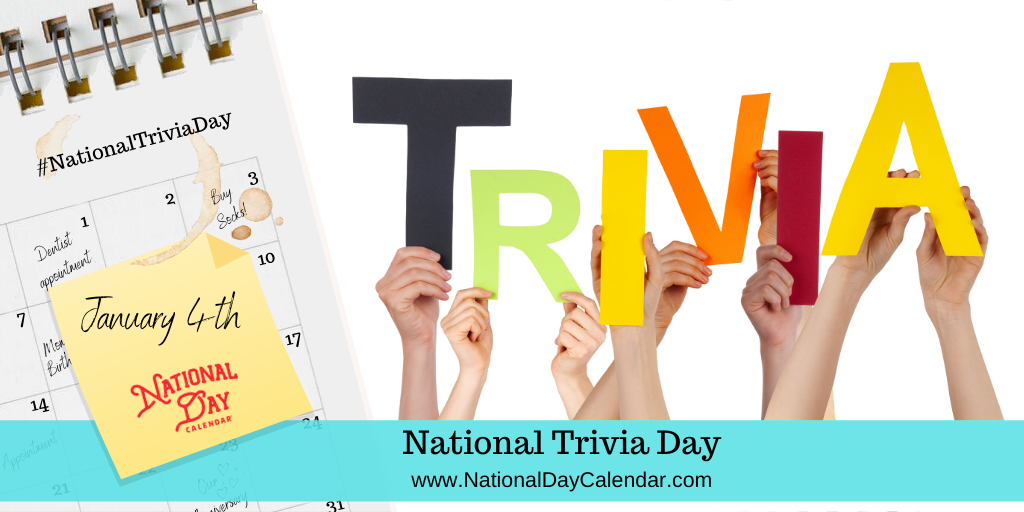 What National Day on January 4th celebrates those who accumulate and hoard tidbits of useless trivia? National Trivia Day, of course!

The holiday recognizes the collectors of unconnected, irrelevant data, facts, history, and quotes each year. They are the ones who usually proffer these sometimes astounding bits of history when friends and family least expect it.

In ancient times, the term “trivia” was appropriated to mean something very new.

Are you into trivia? Challenge someone to a trivia contest, attend a trivia night, or host one at home. Show off your trivia savvy. While you’re at it, find out how much you know about the National Days. See if you can answer these questions. Some of them, we aren’t even sure of the answers.

Educators, visit the National Day Calendar® Classroom for ways to use trivia in the classroom and resources.

Q. Can anyone be good at trivia?
A. Anyone can dominate a specific category, especially if it’s something they are knowledgeable in. Those who have the answers for nearly every category tend to read a lot and have a terrific recall. Gather a team of people with different interests, and you could be on the winning team.

Q. What is the plural of trivia?
A. Trivia is plural. The singular form of trivia is trivium.

January 4th Celebrated (and Not So Celebrated) History

While playing for the Washington Wizards, Michael Jordan scores his 30,000th career point. He becomes the 4th NBA player to reach the achievement and does so while defeating his former team, the Chicago Bulls.

A robotic rover named Spirit landed on Mars. It is the only object to take a photo of Earth from another planet.

The House Representatives elected Nancy Pelosi as the first woman to serve as Speaker of the House.

January 4th Celebrated (and Not So Celebrated) Birthday

The English mathematician and physicist made many discoveries during his lifetime. Gravitational theory is one of Newton’s most recognized theories. However, he also is credited with discovering calculus and the composition of white light.

The educator developed a method of reading for people with blindness. The series of raised dots is called Braille.

One of Thomas Edison’s business associates, Johnson was also an inventor himself. In December of 1882, he wired together a string of lights and strung the first set of lights on a Christmas tree.

The voice actor is best known for his work in several Disney animated films including the voice of Winnie the Pooh, Kaa the Snake in Jungle Book, and Cheshire Cat in Alice in Wonderland.

In 1977, Cannon became the first woman in Oscar history to be nominated for an Academy Award for her work both on-camera and behind the camera. Cannon was nominated in 1970 for Best Actress in a Supporting Role for the film Bob & Carol and Ted & Alice. In 1977, she directed the short film Number One which was nominated for Best Short Film, Live Action.