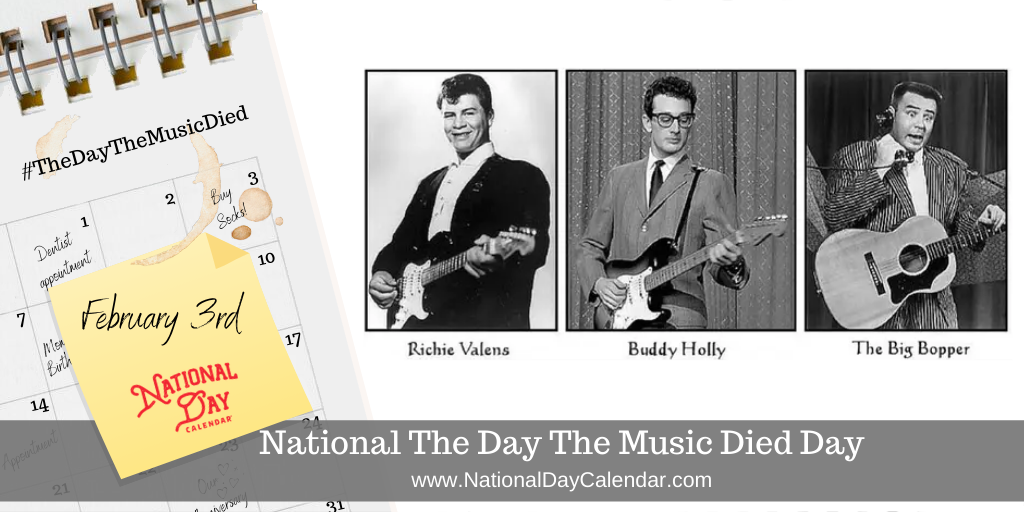 The Day the Music Died Day on February 3rd remembers the unfortunate and untimely death of singers 22-year-old Buddy Holly, 17-year-old Ritchie Valens, and 28-year-old J. P. Richardson, aka: “The Big Bopper.”  These three artists died in an airplane accident on February 3, 1959, near Clear Lake, Iowa. Their pilot, Roger Peterson, also perished in the crash.

Buddy Holly’s band was on tour and had played at the Surf Ballroom in Clear Lake.  They were headed to their next destination in Moorhead, Minnesota.  For this leg of their journey, they decided to take a charter plane rather than go with their tour bus. Richardson “The Big Bopper”,  had swapped places with Waylon Jennings, taking the latter’s place on the plane and Tommy Allsup had lost his place to Ritchie Valens in a coin toss.

Not long after takeoff, they were no longer able to be reached by radio, and they did not reach their destination. The aircraft was reported missing. The next day, the wreckage was found less than 6 miles northwest of the airport in a cornfield.  Poor weather conditions and pilot error were determined, during the investigation, to have been the cause of the pilot losing control of the plane.

The tragic event echoed through history for over 50 years. Visitors still make the pilgrimage each year to Clear Lake, Iowa, the resort town about 110 miles north of Des Moines, as this was the point of their last concert before the fatal accident.

“The day the music died” is a line in the 1972 Don McLean hit “American Pie.” McLean’s song, which he wrote in the late 1960s and released in 1971, was in part inspired by the tragic event which took the lives of three great musicians and their pilot.

“But February made me shiver,
With every paper I’d deliver,
Bad news on the doorstep
I couldn’t take one more step.
I can’t remember if I cried
When I read about his widowed bride
But something touched me deep inside,
The day the music died.”

Listen to some of the music by Ritchie Valens, Buddy Holly, or The Big Bopper.

The observance commemorates the fateful day in 1959 when four young lives were cut short. When Don McLean’s “American Pie” hit the airwaves in 1972, the world came to know the day as “the day the music died’ from the line in the lyrics. Another line in the song reflected on the music of Buddy Holly & The Crickets. In their song “That’ll be the Day” the chorus goes like this:

In McLean’s “American Pie” his similar line appears in the chorus as well:

The Day the Music Died FAQ

Q. How many hits did Ritchie Valens have?
A. Ritchie Valens (Richard Steven Valenzuela) was signed by Bob Keane of Del-Fi Records in May 1958. He recorded two albums before his death just 8 short months later. Some of his most popular songs included Donna, La Bamba, and Cry, Cry, Cry.

Q. How did the Big Bopper get his name?
A. The singer/songwriter known as the Big Bopper began his career in radio in 1949. A popular dance called “The Bop” inspired Richardson to call himself the Big Bopper for a radio program.