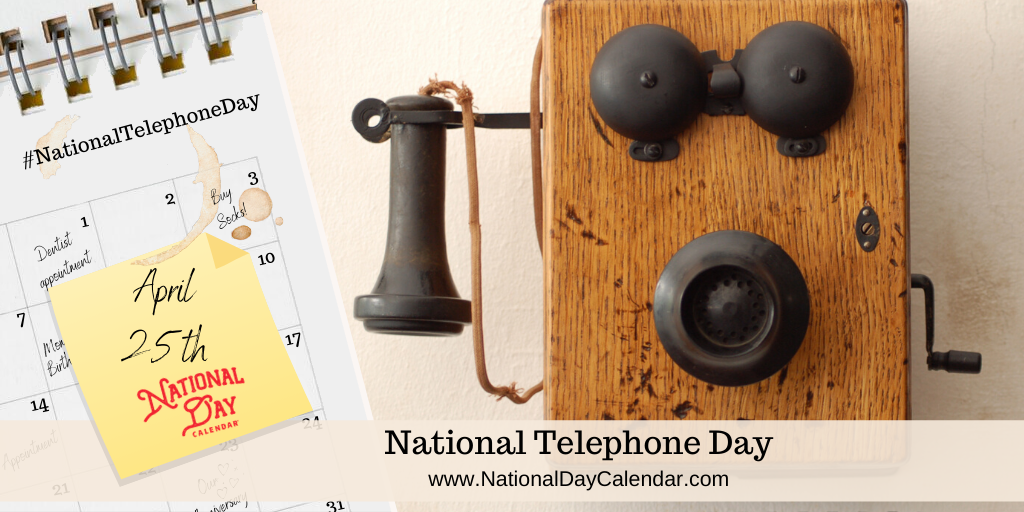 On April 25th, we observe National Telephone Day. Around the world, there are 9.82 billion mobile phones. And while some predicted the landline to be obsolete by 2020, there are still about 931 million landlines around the world.

The correct answer to a trivia question like “Who invented the telephone?” is the name on the patent. In this case, the whole world knows the answer is Alexander Graham Bell. Had his attorney been delayed by foul weather or poor planning, the answer may be a different name.

On February 14, 1876, Marcellus Bailey, one of Bell’s attorneys, rushed into the U.S. Patent office in Boston to file the patent for what would be the telephone.

Later the same day, Elisha Gray filed a patent caveat for a similar device. A caveat is an intent to file for a patent.

There was also a third contender. Antonio Meucci filed a caveat in November of 1871 for a talking telegraph but failed to renew the caveat due to hardships.

Because Bell submitted his record first, the patent office awarded Bell the patent on March 7, 1876. Gray contested this decision in court, but without success.

Born March 3, 1847, in Edinburgh, United Kingdom, Bell taught at a boys’ boarding school. The sounds of speech were an integral part of his life. His father developed a “Visible Speech” system for deaf students to communicate. Bell would later become a friend and benefactor of Helen Keller.

Three days after the patent was approved, Bell spoke the first words by telephone to his assistant. “Mr. Watson, come here! I want to see you!”

By May, Bell and his team stood prepared for a public demonstration. And there would be no better place than the grand stage of the World’s Fair in Philadelphia. On May 10, 1876, in a crowded Machinery Hall, a man’s voice transmitted from a small horn and carried out through a speaker to the audience.

Bell Telephone Company was founded on July 9, 1877, and they installed the first public telephone lines from Boston to Sommerville, Massachusetts, the same year.  By the end of the decade, nearly 50,000 phones existed in the United States.  In May of 1967, phone companies across the country installed the 100 millionth telephone line.

In May of 1967, the 100 millionth telephone line was installed in the United States. On May 11th, governors and dignitaries for U.S. territories joined President Lyndon Johnson on the largest conference call ever held up to that date. Each governor, dignitary, and the President were issued gold phones to commemorate the day. At the same time, a proclamation was issued declaring May 12th as National Telephone Day.

There is no record of the day being observed again on that date. However, National Day Calendar continues to research the origins of this technology day.

Q. Do payphones still exist?
A. Yes. However, the number of payphones began declining in the mid-1990s. If you’re looking for a payphone, some cities and states have payphone maps. You can also look in public places like federal offices, libraries, transportation hubs, large shopping centers, and gas stations.

Q. When was the first smartphone invented?
A. The Simon Personal Comminicator was released in 1994 by IBM.