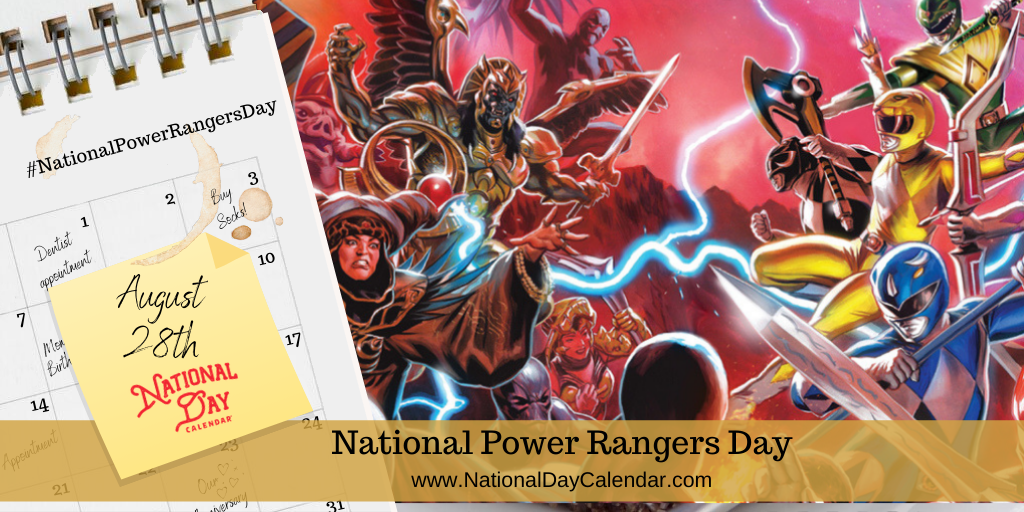 In 1993, five ordinary teenagers exploded on the pop-culture scene with the launch of Mighty Morphin Power Rangers. Together they broke down barriers. They defeated evil by demonstrating teamwork, inclusivity, and diversity to people of all ages. Today, this grand tradition continues as new Ranger teams and new generations of fans discover these essential values again.

On National Power Rangers Day everyone gets to be a Power Ranger! What are your Ranger skills and abilities? Do you have super strength or enhanced memory? Maybe your talent hasn’t been discovered yet. That’s ok! Nor does it matter where you live or who you are. With discipline, mindfulness, and heart, anyone can become a Power Ranger. Ultimately, the goal is calling your friends, color coordinating and celebrating the day!

Whether you are a red, yellow, pink, black, blue, green or (favorite color here) Power Ranger, on August 28th, it’s Morphin’ Time! Celebrate your passion for the Power Rangers. Wear your gear on social media and share your memories.

Be sure to use #NationalPowerRangersDay to get in on the fun.

Throughout its history, Power Rangers pioneered diversity, inclusivity, and teamwork. They exemplify these values through every episode. When the show premiered in 1993, it featured a cast diverse beyond compare. Since then, the show has continued to lead the way proving that all are equal and anyone can be super. In fact, the recent 2017 feature film included one of the first Rangers/superheroes on the Autism spectrum!

Although it began as a children’s show, the Power Rangers’ influence is multi-generational. Nostalgia is at an all-time high. For some, it’s discovering the SupeNinjaua Steel for the first time. For others, who have been fans for decades, the brand’s positive messages and main characters resonate with people around the world. Why? Because everyone can see themselves in these inspiring teenage heroes.

It’s one of the most recognizable franchises in the world. And the series created by Haim Saban has one of the most popular taglines in history, “It’s Morphin Time!” The TV series “Mighty Morphin Power Rangers” (MMPR) launched on August 28, 1993. Power Rangers quickly became the #1 kids action brand and a global phenomenon. With its current 25th season, “Power Rangers Super Ninja Steel,” the show is now the second longest-running non-soap opera scripted program on American TV after “The Simpsons.” There are also over 830+ episodes in its library. Currently, Power Rangers is seen in more than 150 markets around the world. It’s also translated into numerous languages and a favorite on many indispensable children’s programming blocks around the world. Go Go Power Rangers on 8.28!