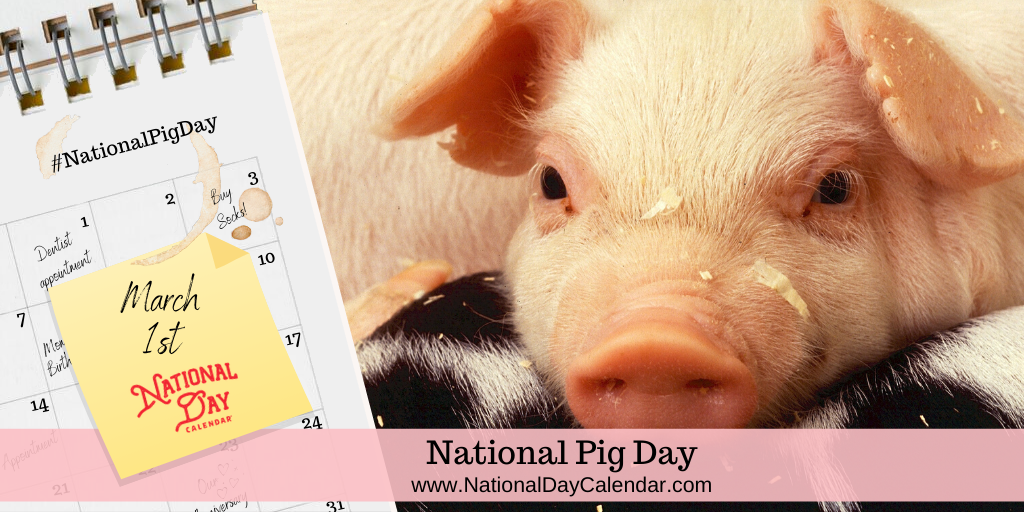 National Pig Day, observed annually on March 1st, recognizes the domesticated pig. This holiday includes events and celebrations at zoos, schools, nursing homes, and sporting events around the United States. Pig parties, pig parades, and gatherings with pig collectibles are some of the other commemorated National Pig Day events.

Pigs are clever and intelligent animals. However, most people are not aware of their high level of intelligence. Some are household pets that can be trained and taught tricks.

In Dublin in 1772, a trained swine called the Learned Pig told time, counted, and other such tricks to entertain crowds in the streets.

There was a famous, if fictitious, Learned Pig in London in the late 1700s, which seemed to gain his learnedness from his mother. She ate an entire volume of Sir Robert Filmer’s manuscripts and “Saobeverel’s Sermons” before delivering him into the world. He was born with an intelligence that seemed obvious just by looking. When one day he feasted upon the garden of the great Milton himself, he began waxing poetic.

Pigs have been popular storybook characters for generations. From A.A. Milne’s Piglet to E.B. White’s Wilbur, pigs have an endearing and flavorful quality about them that makes us love them.

There are hundreds of different breeds, most of which descend from the Eurasian Wild Boar. The female is called a gilt or sow and can produce 10 piglets in a single litter. They also provide bacon, ham, baby back ribs, spare ribs, sirloin, pork belly, and oh, so many more delectable barbecue items it would be a shame not to honor the swine on this day of all days.

Cuddle up with one, read about one, or eat one. Use #NationalPigDay to post on social media.

Q. What is another word for a pig?
A. Swine and hog are both used to describe the animal known as a pig. Swine is typically used in farming, breeding, and science.

Q. Are pigs used for human transplant procedures?
A. Yes. For decades, pig heart valves have been used to replace heart valves in humans. Most recently, a genetically modified pig heart was transplanted into patient David Bennett who was left with no other options for survival. The transplant began on January 7, 2022, at the University of Maryland Medical Center and was performed by cardiothoracic surgeon Bartley Griffith. The experimental procedure has been deemed a success as Bennett continues to improve. The process is called xenotransplantation.