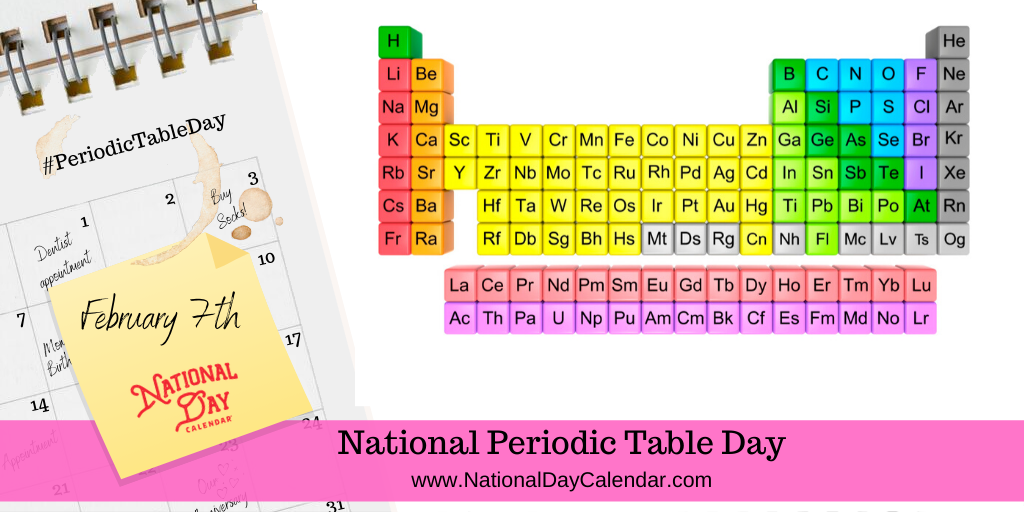 On February 7th, National Periodic Table Day recognizes the publication of the first table of elements. We also look at how the periodic table has changed through the years.

The periodic table has a long history. It and the discovery of elements impacted science in many ways. Ancient man only knew of a few elements. However, by the 1st century A.D., mankind knew about the elements of gold, silver, copper, iron, lead, tin, mercury, sulfur, and carbon. Over time, we added arsenic, antimony, phosphorus, and zinc to our discoveries. By 1809, there were 47 discovered elements. It was time to organize, and Johann Döbereiner made one of the earliest attempts to do that. He organized the elements in 1817 into groups of three, or triads, based on similar qualities.

On February 7, 1863, English chemist John Newlands published one of the first table of elements. Newlands divided the known 56 elements into 11 groups based on the “Law of Octaves.” His table suggested that anyone element will have similar properties to elements eight places before and behind it on the table.

Arranging the elements according to increasing atomic weight, Newlands was one of the first scientists to detect a pattern to the properties of elements. As a result, his table left room for new discoveries. It even predicted future discoveries would complete the table. In fact, Newlands correctly predicted the discovery of Germanium.

While parts of Newlands’ periodic table contained flaws, so did other later proposed tables. In 1869, chemist Dimitri Mendeleev published a paper developing a new periodic table. Mendeleev’s table also arranged the elements based on atomic mass. By this time, science had only identified 60 of the over 100 elements we know today.

As on previous tables, inaccuracies were attributed to some of those elements. While Mendeleev corrected some of these inaccuracies, he didn’t correct them all. Mendeleev made assumptions about others causing elements to be placed incorrectly on the table. Like Newlands, Mendeleev also predicted discoveries, and he correctly predicted the properties of five elements and their compounds.

The discoveries throughout Scot William Ramsay’s career from 1892 to 1910, along with John William Strutt, Morris Travers, and Frederick Soddy led to the identification of the noble gasses. In 1904, the Nobel Prize was awarded to Ramsay for discovering five elements.

Henry Moseley, an experimental physicist, contributed to the development of the modern periodic table. In 1913, Moseley discovered that each element has a specific number of protons. As a result, four new chemical elements were later found, though not during his lifetime.

Since the early 20th century, the periodic table remains largely unchanged. However, the 21st century is still young. Some researchers suggest new approaches to the periodic table while maintaining its integrity as one of the most valuable tools in the science of chemistry. The current table tallies a total of 118 elements.

Test your knowledge of the periodic table. Celebrate with Periodic Table trivia or challenging each other to name the elements. Take it a step further and name the number of protons in each element.

Learn more about elements on the periodic table by reading 7 History Making Elements.

On February 7, 2016, the first National Periodic Table Day was founded. The day serves to promote the challenges overcome to develop the modern periodic table. Mr. David T. Steineker, author, inventor, and chemistry teacher at Jefferson County Public Schools in Kentucky is inspired by those challenges. He took the initiative to celebrate National Periodic Table Day based upon John Newlands’ first table of the elements published on February 7, 1863.

Q. What’s the heaviest element on the periodic table?
A. The heaviest element by atomic weight is oganesson (Og), first synthesized in 2002. It is also one of two elements that have the greatest density. The other is iridium (Ir)

February 7th Celebrated (and Not So Celebrated) History

The Beatles arrive in (or invade) the United States. Beatlemania begins.

Swiss women were granted the right to vote. Since 1868, Swiss women had been demanding the right to vote and every time it was denied. Nearly every two decades women’s suffrage would be brought before the various committees, councils, and Parliament, and the motions were ignored or passed on. The European Convention on Human Rights brought the issue to the table once again and finally, in 1971, Swiss women had a voice. However, there were still many regions in Switzerland that did not allow women the vote at certain levels of Swiss elections. It wouldn’t be until 1991 that women could vote at all levels of Swiss elections.

February 7th Celebrated (and Not So Celebrated) Birthdays

In 1837, the blacksmith and manufacturer launched the Deere & Company in Moline, Illinois after developing a steel plow precisely designed to cut through the prairie clay soils.

The British author created some of the world’s most memorable characters. His classic tales of Nicholas Nickleby, Oliver Twist, and David Copperfield are only a few of his beloved titles. Others include A Christmas Carol, Great Expectations, The Pickwick Papers, and The Cricket on the Hearth.

The American author wrote about her experiences growing up as a pioneer in Midwest. Her Little House books depicted frontier life, the first set in Wisconsin.

In 1930, the American writer received the first Nobel Prize in Literature. The author is known for his novels Babbitt, Mainstreet, and Arrowsmith.

The American country music singer and songwriter earned numerous awards. His self-named debut album included hits such as “Much Too Young (To Feel This Damn Old)” and the Dance.

Rock began his career as a stand-up comedian in the mid-1980s. In 1990, his star took off when he joined the cast of Saturday Night Live. His acting career includes hits on both the big and small screens.