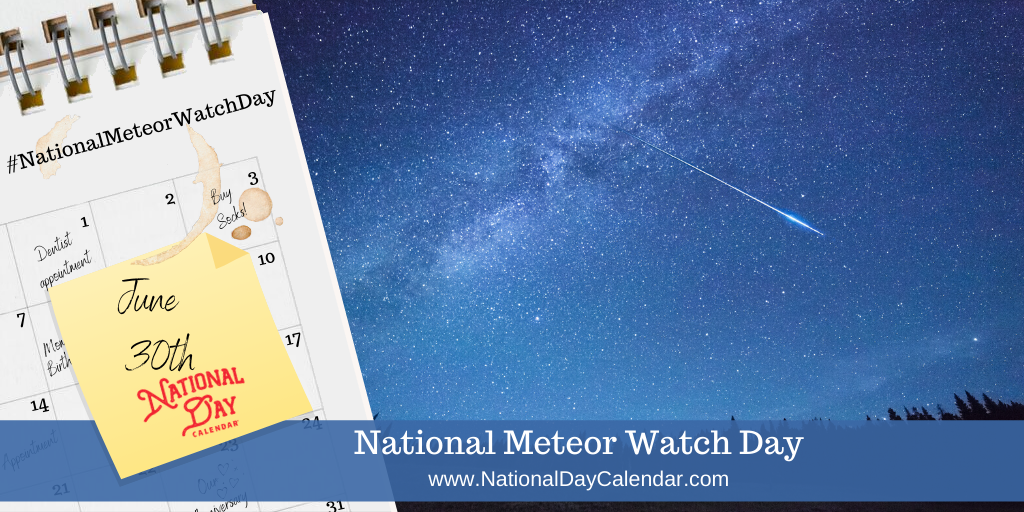 On June 30th, National Meteor Watch Day encourages us to look to the stars to witness one of the night sky’s most thrilling sights. Also known as National Meteor Day, on a cloudless night, people turn their eyes to the heavens in hopes of spotting the glow of a falling star.

When space debris, such as pieces of rock, enter the Earth’s atmosphere the friction causes the surrounding air to become scorching hot. This “shooting star” streaking through the sky surrounded by flaming hot air is a meteor.

The majority of the meteoroids that cause meteors are only the size of a pebble.

Meteors sometimes occur in showers. It’s an excellent time to plan for a meteor-watching party. Whether we catch a few stray falling stars or witness an entire meteor shower, this day calls for an evening with friends and family under the stars. Identify the constellations while waiting to make a wish or two. Sounds like a romantic night, as well.

In the Northern Hemisphere, one of the most active meteor showers is the Perseids. Named after the constellation Perseus where the majority of the activity takes place, particles released by the comet 109P/Swift-Tuttle cause the meteors to shower down onto Earth. One of the most impressive meteor showers in the Northern Hemisphere, the Perseids put on dazzling displays. Some years, on a clear night with a new moon, skywatchers view more than one meteor per minute! The Perseids are active from mid-July to late August.

We usually observe meteors at night, and they are visible when they are about 34 to 70 miles above the Earth. When they come within 31-51 miles of the Earth, they often disintegrate. Their glow time is usually about a second.

Despite the large number of meteors we see, a small percent of meteoroids hit the Earth’s atmosphere and then skip back into space.

The chemical composition and the speed of the meteoroid will cause different hues to the light. Possible colors and elements producing them include:

A list of meteor shower dates, as well as a guide to successful watching, can be found on the EarthSky website.

Plan your night with these 9 Steps to Great Night Sky Viewing. Gather some friends together, a blanket, and find a place far from the city lights on a cloudless night. Use #NationalMeteorWatchDay to share on social media.

Educators and families, check out the National Day Calendar Classroom for more ways to Celebrate Every Day!

Within our research, we were unable to identify the creator of National Meteor Watch Day.

June 30th Celebrated (and Not So Celebrated) History

June 30th Celebrated (and Not So Celebrated) Birthdays

The colonial immigrant became the first female newspaper editor and publisher in America. After the death of her father, Timothy assumed his role in printing the South Carolina Gazette under contract with Benjamin Franklin.

The award-winning singer, dancer and actress performed for audiences on stage and screen for more than 70 years.

Out of 58 fights, the American heavyweight boxer won 50. Of those, 44 were knockouts, earning him the nickname Iron Mike.

In 2008, the U.S. Olympic swimmer won his 11th career gold medal. Four years later at the London Summer Olympics, Phelps garnered a record of 8 medals. Over the course of his Olympic career, Phelps earned a whopping 28 medals.