National Kids Take Over the Kitchen Day on September 13th brings the youngest cooks into the kitchen!

Kids and teens across the country are called to take over their kitchens! This observance encourages using their favorite recipes to make a meal for their family. (Adult supervision and assistance as required for the younger bakers and chefs in the house!)

The Young Chefs Academy (YCA) mission empowers kids and teens to become more actively involved in the kitchen. They encourage children to help in the planning, preparation, and cooking of meals. Another focus of the YCA includes fostering family bonds. As a result of their work, they actively fight the battle against the many serious health and social issues related to youth’s eating habits in today’s time.

When children take an active part in their family mealtimes, they learn to eat healthier. However, mealtime is also a social activity. We learn about each others’ days and take an interest in each others’ lives. Mealtimes are enormously productive when we work together and enjoy together as families.

HOW TO OBSERVE KIDS TAKE OVER THE KITCHEN DAY

Let the kids cook for a change of pace. Ask children to take part in the cooking activities more often, too. Not only will they learn about cooking and healthy eating, but they will learn about responsibility. They will feel more a part of the family. They might even find joy in the meals they help to provide, too! Try one of these kid-friendly recipes to get your children cooking. While they whip up their culinary masterpieces, it’s an excellent time to teach them so many things:

Educators, be sure to visit the National Day Calendar Classroom for ideas on how to celebrate with your students.

National Kids Take Over The Kitchen Day is sponsored by the Young Chefs Academy. Be sure to check out this organization to discover how they encourage children to learn the kitchen!

Kids in the Kitchen FAQ

Q: At what age can children begin to learn to cook?
A. About the time children begin walking well on their own, they can begin some of the basics of cooking. Toddlers can stir, scoop, sprinkle, and sort, among many other skills. Start with a simple recipe that doesn’t require the stove or sharp utensils, such as peanut butter and banana sandwiches or yogurt parfaits.

Chemist Michael Faraday discovers how a magnetic field influences polarized light. Today, the discovery is known as the Faraday Effect.

The Cleveland Blue’s one-armed pitcher, Hugh Daily, pitches a no-hitter against the Philadelphia Quakers, earning a 1-0 win. The right-handed pitcher lost his left arm as a boy when a revolver accidentally discharged.

Blues musician, T-Bone Walker, records “Call it Stormy Monday (But Tuesday is Just as Bad). Later, the popular song is recorded by several other artists including B.B. King, the Allman Brothers Band and Cream.

Patent number 2,717,437 issued to Swiss inventor George de Mestral. His creation became known as Velcro® and was inspired by burrs stuck in his dog’s fur.

The Hanna-Barbera animated cartoon series premieres on CBS. With mysterious plots, a Great Dane (Scooby-Doo) and meddling teenagers, the show ran for three seasons and inspired several spin-offs and movies. 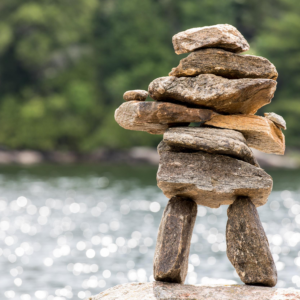 Do you know what an inukshuk is? It’s a stone sculpture traditionally built by the Inuit people. They often serve as a marker for a variety of reasons. Jose Melo of Ontario, Canada created the world’s tallest. His measured 37 feet and 3.9 inches tall. The president of Allstone Quarry Products used 11 granite slabs to build the sculpture.

During the War of 1812, Great Britain and The United States squared off over maritime rights. As a colony of Great Britain, Canada took up arms against the Yankees. In June of 1813, Laura Secord learned of an impending American attack on the British outpost at Beaver Dams. To warn the British troops, Secord walked 20 miles to successfully raise the alarm.

Before building a booming chocolate business, Hershey opened the Lancaster Caramel Company. After deciding to focus on chocolate, a decision no one regrets.

A graduate of West Point military academy, the Army general led the American Expeditionary Force during World War I. During the Spanish American War in 1898, he earned the nickname Black Jack.

The first American Rhodes Scholar, his writing led the Harlem Renaissance into the American spotlight.

As a female pilot, “Melli” pioneered aviation for women in Germany. In 1911, she became the first woman in Germany to earn her pilot’s license. Her talents weren’t limited to flying, though. She also built her own planes.

Dahl’s most popular novels have a knack for making it to the silver screen. Novels like James and the Giant Peach, Charlie and the Chocolate Factory, Fantastic Mr. Fox, The BFG, and Matilda have brought whimsey and colorful characters into children’s lives for more than 40 years.

As a utility player in the All American Girls Professional Baseball League, Romanowski played 8 seasons with a variety of teams, including South Bend Blue Sox, Rockford Peaches, and Kalamazoo Lassies. Nicknamed Romey, Romatowski played for the Kalamazoo Lassies as they won the championship game in 1954. She also got to travel to Cuba for an exhibition game. After the AAGBL ended, she became a teacher in Michigan.

The animator is known for favorite feature films such as The Secret of NIMH, An American Tail, and All Dogs Go to Heaven.