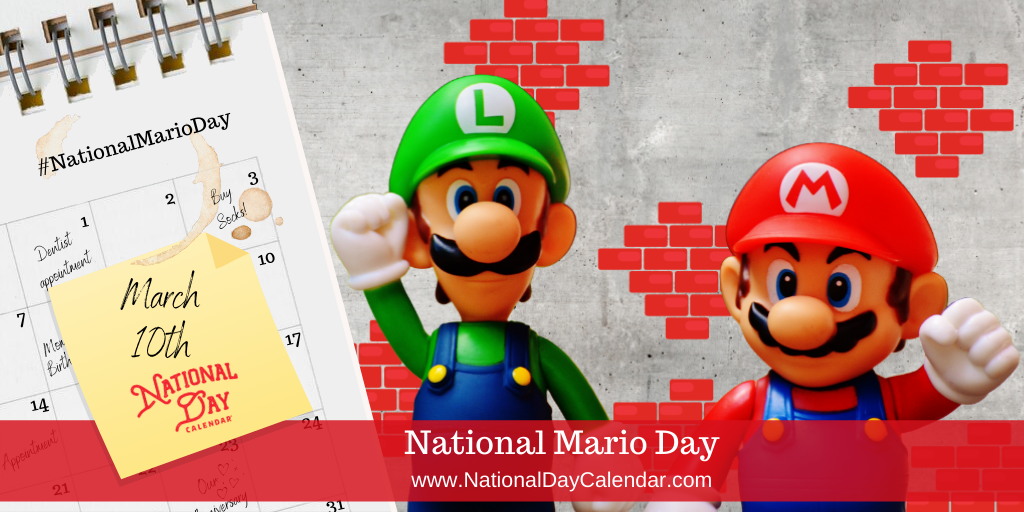 National Mario Day on Mar 10 recognizes an iconic character from a popular video game. The character, known today as Mario, first appeared in 1981 in a game called Donkey Kong made by Nintendo.

Dedicated fans knew Mario before his time as a plumber. At his creation, Donkey Kong portrays Mario as a carpenter named Jumpman. Then in 1983, Nintendo launched a new game in which bad guy Jumpman reinvents himself into an Italian plumber who rescues princesses.

Italian plumbers, Mario and his brother Luigi face numerous obstacles in the games produced by Nintendo. Over the years, gammers help Mario cross several different landscapes all to rescue Princess Toadstool or Princess Peach, depending on which game they play. No matter the kingdom or galaxy, video game fans find the games entertaining and challenging. Many will admit, they find the characters endearing. The storylines provide hours of fun and continue to be a part of the pop culture landscape.

Whether you’re a Mario fan, a gamer, or just like to have a little fun, this day is for you. Celebrate by inviting friends and family to play. Try these ideas and share more by using #NationalMarioDay on social media:

Video gamers fond of the Nintendo game and its characters created the game. The date was cleverly selected for the way it spells the character’s name when abbreviated. Despite this limited information, we’ve not been able to identify specific founding members of the day. Perhaps they’re hidden in power-up or an incomplete level of the game.