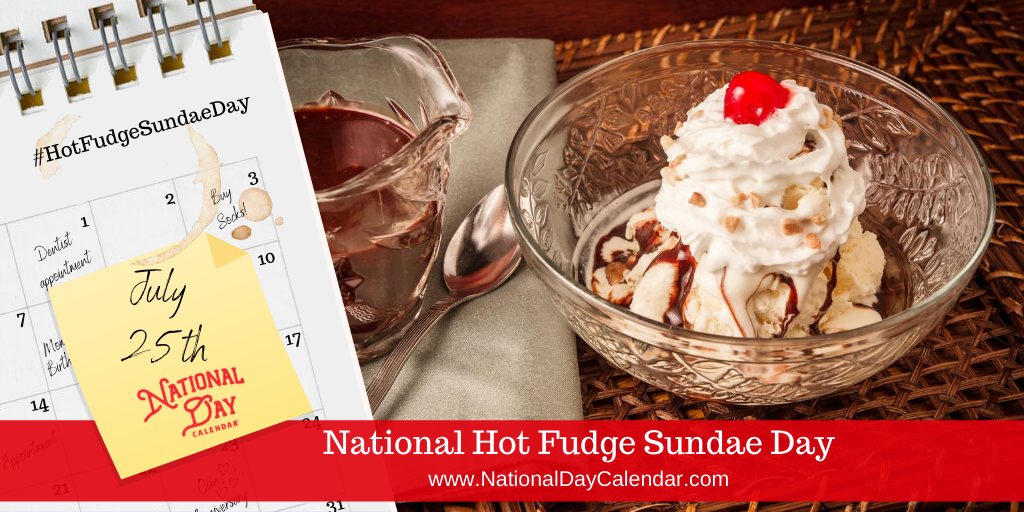 On July 25th, National Hot Fudge Sundae Day takes a turn representing National Ice Cream Month in delicious style. Feast on this tasty ice cream dessert that combines hot and cold with a cherry on top. Even more important to note, this dessert has been served since 1906.

Given that the hot fudge sundae is a variation of the classic sundae, making one is a cinch. Simply put a couple of scoops of vanilla ice cream in a dish. Add hot fudge sauce. Top it with a dollop of whipped cream and some nuts (if you like). Finally, add a single, bright-red, sweet, maraschino cherry.

While the oldest known record of an ice cream sundae is an Ithaca, NY advertisement, the originator of the dessert is still debated. The October 5, 1892 ad in the Ithaca Daily Journal spelled the ice cream treat with the conventional day of the week spelling – Sunday.

However, Two Rivers, Wisconsin claims Druggist Edward Berners served the first ice cream sundae in 1881. According to the story, customer George Hallauer ordered an ice cream soda on a Sunday. Ordinances at the time prohibited the sale of ice cream sodas on the Sabbath. Even so, Berners came up with a compromise. He served the ice cream in a dish minus the soda.

Additionally, he topped it with chocolate syrup. Given the day, he called it a Sundae. One interesting catch – Berners was 18 at the time the story takes place.

Ithaca’s claim to the ice cream sundae takes place at Platt & Colt Pharmacy in 1892 where Reverend John M. Scott stops to order a bowl of ice cream. When Chester Platt, proprietor, began preparing the ice cream for his customer, he didn’t stop at just a couple of scoops of vanilla. Platt drizzled cherry syrup over the ice cream and topped them with a bright red, candied cherry. The dessert looked and tasted so delightful it required its own name. Since the day was Sunday, it was named for the day it was created. Ithaca also has historical evidence supporting the story, including an advertisement for a Cherry Sunday.

While out with friends, enjoy a Hot Fudge Sundae.  Give a shout out to your favorite ice cream shop.  Post on social media using #HotFudgeSundaeDay.

We were unable to find the creator of National Hot Fudge Sundae Day.