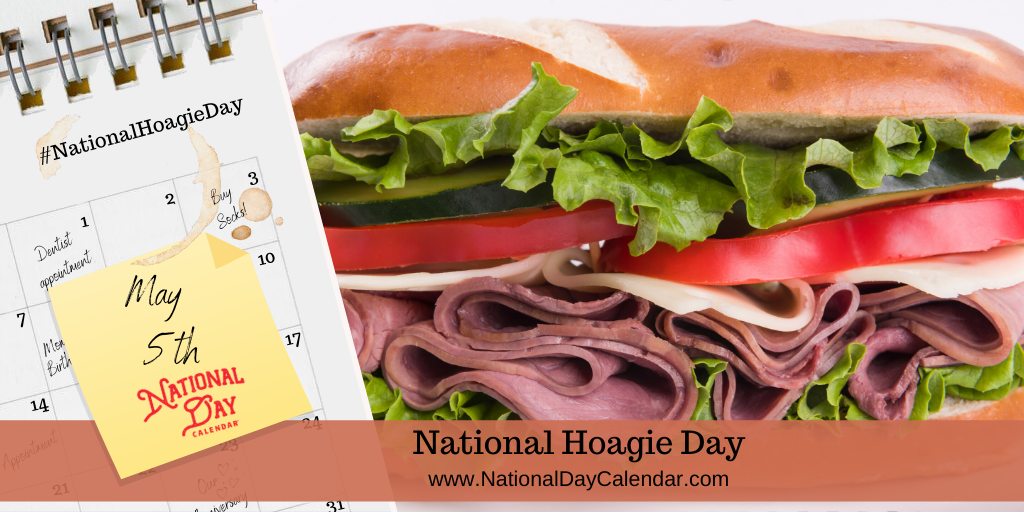 It may go by many names, but on May 5th, National Hoagie Day celebrates a hero of a sandwich!

Besides a hero, the hoagie goes by several other aliases. The sub, grinder, Italian, torpedo, or baguette are just a few of its many names. Some of those names give a hint as to how we make a hoagie, too. We cut a long Italian roll or French bread lengthwise and fill it with various meats, cheeses, vegetables, seasonings, and sauces. Pile it high with your own combination of fillings and enjoy it either hot or cold.

About the Word “Hoagie”

In 1953, Italians working at the World War I-era shipyard in Philadelphia known as Hog Island packed their lunch to work every day. They introduced the sandwich by putting different meats, cheeses, and lettuce between two slices of bread. It was referred to as the “Hog Island” sandwich, which they later shortened to the “hoagie.”

A different explanation is offered by the Philadelphia Almanac and Citizen’s Manual. They believe early 20th-century street vendors called “hokey-pokey-men” created the sandwich.

Yet another theory is that the word “hoagie” arose in the late 19th to early 20th century among the Italian community in South Philadelphia. The phrase “on the hoke” was used as slang to describe a destitute person. Deli owners gave away scraps of meat and cheese on an Italian roll known as a “hokie.” However, Italian immigrants pronounced it “hoagie.”

Oh, you can celebrate this day in so many ways!

National Day Calendar continues researching the origins of this sandwich holiday. While we do, we’ll have a sandwich or two.