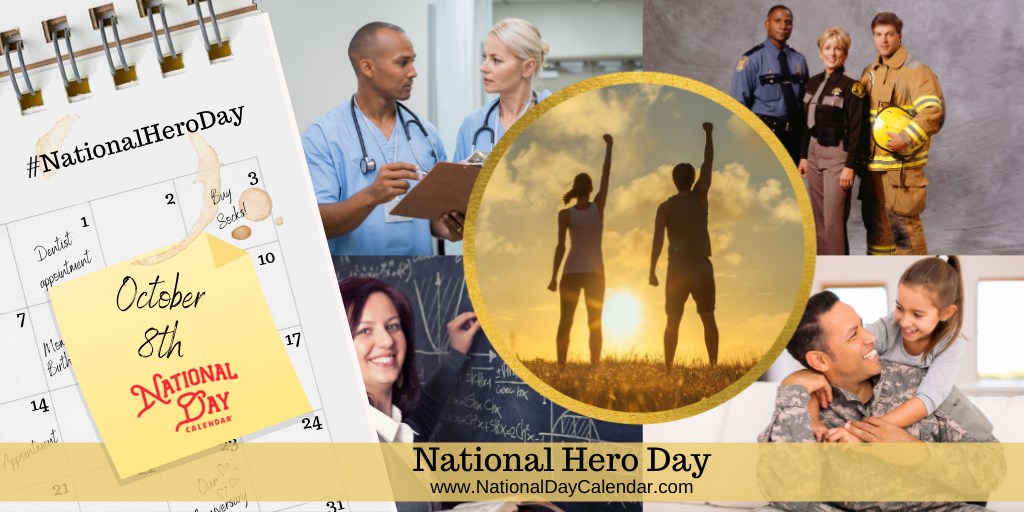 On October 8th, National Hero Day honors the people we look up to and who inspire us to be the best person we can possibly be.

If asked to define the word hero, many of us will name the qualities that demand a person rise above, the qualities that genuinely drive a person to be stronger, smarter, kinder and more than the average human being. They are the people who give when they have nothing to give. Heroes act before anyone else realizes there’s a problem. They volunteer to put someone else before them.

Our heroes may be the first responders who save us from a dangerous situation. They may be a mentor, like a parent or a teacher. As role models, heroes guide us through the examples they set. They live their lives in such a way that we’re honored to know them and hope to live up to their example.

And heroes, real-life heroes, rarely get recognized. That’s why National Hero Day encourages you to recognize the heroes in your life.

Heroes All Around Us

Some wear uniforms, like Christy McIntosh of Pensacola, FL who served in the U.S. Army Reserves. Or like high-school football player Zac Clark of Ohio whose quick thinking and strength lifted a Volkswagen off of his neighbor, saving his life.

Other heroes spur us to action or to lead a better life. They may do this through their words like Jim Cook of Oklahoma who wrote to columnist Jim Priest, teaching him a little something about character and love. A real-life hero might take us on a journey we can only imagine taking. Like Dr. Garrett Reisman, a former NASA astronaut and engineer who later joined SpaceX.

Another kind of hero makes things happen. Whether it’s filling a need or making the impossible happen, some heroes go to amazing lengths to get a job done. For example, Donald Harris of New Jersey who by day was a real estate manager but at Christmastime answered a letter to Santa via the U.S. Postal Service’s Letters to Santa program. His answer to a request to make a father’s life easier was to enlist his associates in obtaining a townhouse for the family at a much lower rent.

Heroes come in many forms, you see. They rescue us, inspire us, and most of all, they believe in us.

Honor the heroes in your life. Give them a shout-out on social media or bring them coffee from their favorite coffee shop. Bake some cookies or write them a letter. Let them know how much they inspire you, how much you appreciate them. Be a hero in someone’s life, too. Use your talent to teach someone a vital skill. Other ways to be heroic include:

Who are your heroes? Let the world know by using #NationalHeroDay to share on social media.

The Registrar at National Day Calendar proclaimed National Hero Day in 2020 to celebrate the contributions and deeds of all the real-life heroes in our world.