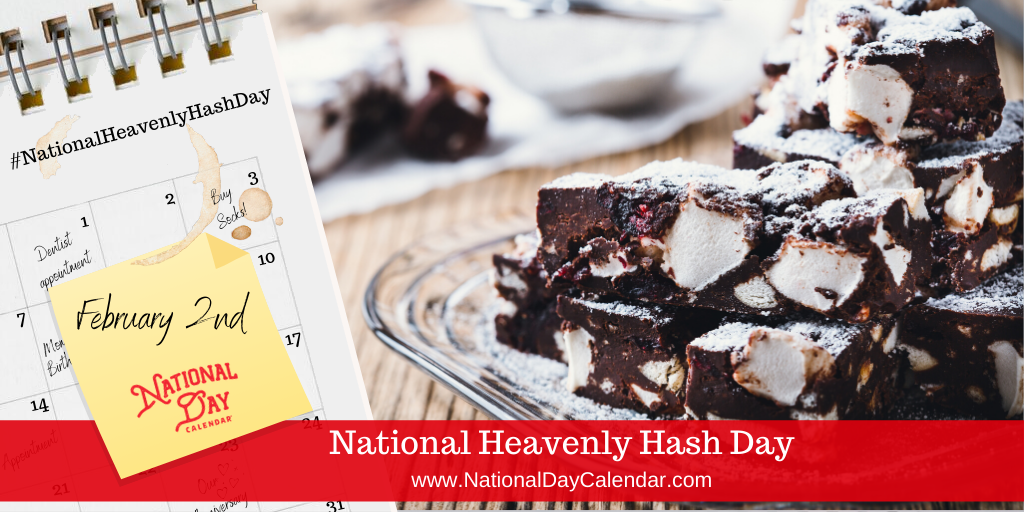 National Heavenly Hash Day on February 2nd recognizes a family favorite that covers a variety of desserts with a common ingredient.

When it comes to defining Heavenly Hash, the only ingredient that seems for certain is a variety of marshmallows, marshmallow creme or whip. Other ingredients vary, though. Some recipes create delicious cakes with chocolate and marshmallow. And yet, others lean more toward a fruit salad with whipped cream and a variety of nuts or chocolate bars added. Nearly every brand of ice cream has its version of Heavenly Hash with nuts and chocolate included, too.

However, the common ingredient seems to always be a form of marshmallow bringing the dish to a heavenly flavor perfect for potlucks and family gatherings.

National Day Calendar continues to research the origins of this elusive dessert holiday.

The United States and Mexico sign the Treaty of Guadalupe Hidalgo. The treaty defined the boundary between the two countries as the Rio Grande River.

Using Thomas Edison’s kinetoscope, William K.L. Dickson filmed Fred Ott as he sneezed at Edison’s Black Maria Studio. Named “Record of a Sneeze,” it consisted of 45 frames and is the first film recorded in the studio. It is registered as a photograph but not as a film because the category did not exist at the time.

Considered one of the film world’s first stuntmen, Frederick R. Law parachuted from the torch of the Statue of Liberty and landed 30 feet from the bay. This wasn’t his first parachute jump nor would it be his last.

After a week of mushing 625 miles of brutal conditions, 20 drivers and their dogs safely relay a delivery of 300,000 doses of Diptheria serum to Nome, Alaska.

In 1876 Stevenson became the first woman to join the American Medical Association.

In 1937, the American businessman established the Solomon R. Guggenheim Foundation. Two years later, the museum by the same name was built.

The Irish novelist and poet is best known for his novel Ulysses which at the time created controversy for its content.

The Russian-born novelist developed the philosophical system Objectivism. Her best-known novels include The Fountain Head and Atlas Shrugged.