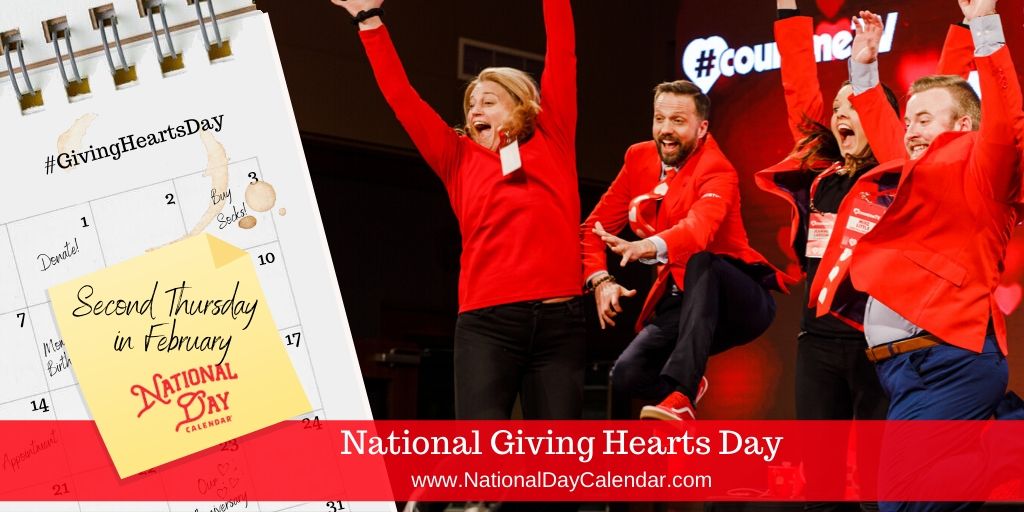 Big hearts give big on National Giving Hearts Day! On the second Thursday in February each year, the celebration offers one of the best opportunities to donate to your favorite charity. Not only that, this is the longest-running giving day in the United States. So many hearts and so much to give!

In a single 24 hour period, more funds are raised for charities throughout the upper Midwest. Organizations like soup kitchens, medical foundations, STEM programs, arts programs, and so many more raise money to advance their missions. And the money goes directly to the charities YOU love the most. Plus, you can give to as many charities as you want. Give to one, or give to several.

Whether you’re a donor or a charity, get involved. Rally your organization and provide support to your favorite charity. And it doesn’t matter where you are on the planet. You can still give.

HOW TO OBSERVE ON #GivingHeartsDay

Fargo, North Dakota-based Impact Foundation submitted National Giving Hearts Day in 2019 to celebrate the 24-hour giving event for charities across North Dakota and northwestern Minnesota. Giving Hearts Day was formed in 2008 by Dakota Medical Foundation (DMF) and Impact Foundation as a way for people to support the charities and causes they love. From just under $500,000 raised in its first year to more than $19 million raised in 2020, it has become a day of exceptional impact.

The Registrar at National Day Calendar® proclaimed National Giving Hearts Day to be observed annually on the second Thursday in February.

Q. Can I give to any charity on Giving Hearts Day?
A. Yes! And you can give to as MANY as you want, too.

Q. Is there a minimum amount to give?
A. No. Give what you can.