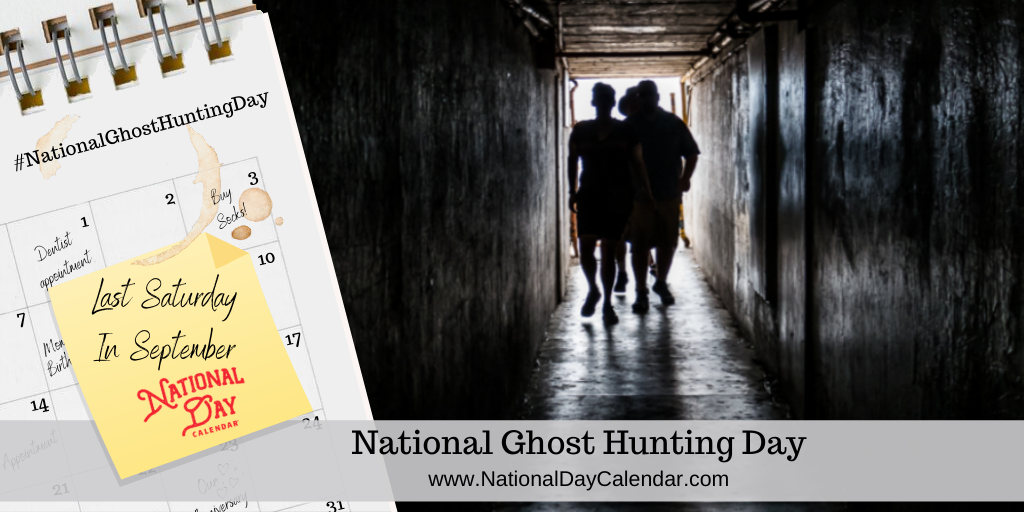 On the last Saturday in September, as part of the World’s Largest Ghost Hunt, National Ghost Hunting Day kicks off an annual international investigation of the paranormal.

Ghost hunting stirs up images of abandoned mansions with murderous histories. For others, ghost hunting involves specters guarding ancient crypts. Centuries-old ghost stories around the world focus on historical records or literature. Science, religion, and academia debate their existence. Even their use by Shakespeare and other playwrights is often considered a continuation of that discussion.

Seeking paranormal activity isn’t limited to crumbling ruins and darkened, forgotten corners of the world. Public places boast eerie tales of spectral voices or haunting mists. For example, both the Tower of London and the White House in Washington, D.C. crackle with the electricity of paranormal activity. The former is thought to be haunted by Ann Bolyn’s ghost. With regards to the White House, the stories are plentiful, too.

Enthusiasts bring attention to historic properties. They also have an interest in preservation. As part of the adventure, sleuths visit Civil War-era towns like Old-Salt Sulphur Springs, Virginia. Others join ghost walks like the one at Rohs Opera House in Kentucky. For train lovers and train-loving ghosts, hop on board in Colorado. There are many historical locations ready for sleuthing and investigation on National Ghost Hunting Day.

Perhaps it’s the anticipation for the novice – someone yet to experience the thrill of witnessing a restless soul making contact for the first time. Lured into their first haunted journey, the novice remembers the first spooky ghost story read by flashlight under the bedsheets. Or perhaps it was an unexplained blur on a snapshot. Sometimes, just the prospect of a spirit lingering nearby piques the investigator’s interest. However, actual sightings are rare and fleeting.

With the increase of movies and television shows going on the hunt, interest grows. Societies worldwide continue developing methods of proving the existence of ghosts, spirits, and other paranormal activity. Typically, a ghost hunting team attempts to collect evidence they see as supportive of paranormal activity. Devices such as an EMF meter, digital thermometer, handheld, and static digital video cameras, audio recorders, and computers are all part of a team’s toolbox.  However, they also employ traditional techniques like conducting interviews and researching the history of a site.

National Ghost Hunting Day will kick off with the Shot-Gun start at The ScareFest in Lexington, KY.  To join in the coast-to-coast simultaneous hunt, find a satellite team near you! In addition, national ghost hunting societies will be participating across the country investigating local venues. Use #NationalGhostHuntingDay to share on social media.

Haunted Travels founded National Ghost Hunting Day to kick off a season full of haunted attractions and fall festivities. They encourage enthusiasts to pursue their interests in the mysteries surrounding the supernatural and carry on ghost hunters’ long-held traditions. One hundred percent of funds raised through ticket sales go to local non-profit pet shelters in each participating community. The Registrar at National Day Calendar approved the day in July of 2016.

Q. What other tools do ghost hunters use?
A. Ghost hunters use a variety of tools to identify or prove the existence of a ghost. Some of those tools include: