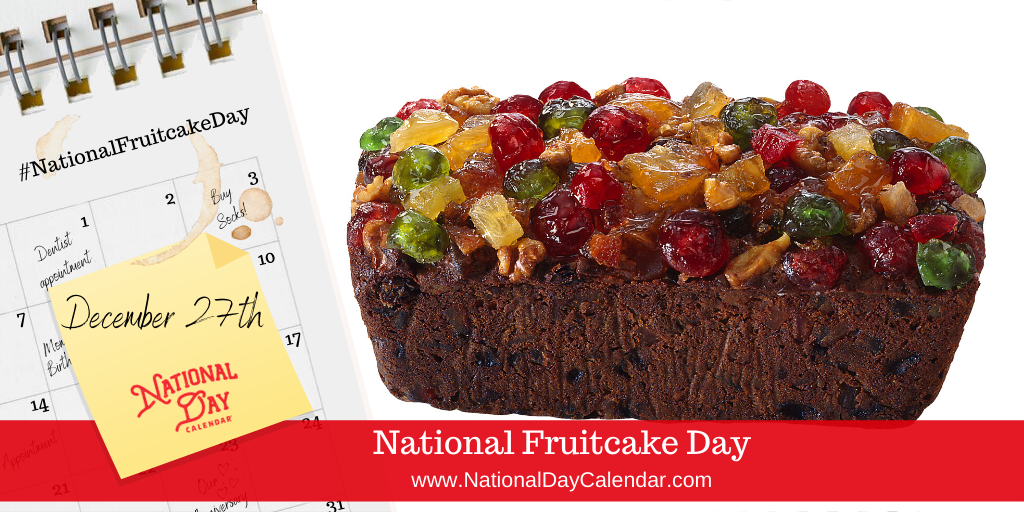 Made with chopped candied or dried fruit, nuts, and spices and sometimes soaked in spirits, fruitcake has been a holiday gift-giving tradition for many years.

Dating back to ancient Rome, one of the earliest known recipes lists pomegranate seeds, pine nuts, and raisins mixed into barley mash. Records indicate that in the Middle Ages, makers added honey, spices, and preserved fruits. Recipes for fruitcakes vary from country to country, depending on available ingredients and tradition.

Share a fruitcake story or recipe. Or maybe share both. Invite someone to enjoy some fruitcake with you. No matter how you celebrate, use #NationalFruitcakeDay to post on social media.

You can also explore the other 5 Time-Honored Christmas Foods to get a jump on next year.

National Day Calendar will continue to experiment with recipes until we get it right. In the meantime, we’ve not found the origins of this immortal cornerstone of holiday baking, either.

Q. I’ve never eaten fruitcake because I’ve always heard it is awful. Is that true?
A. No, it doesn’t have to be true. There’s a difference between quality fruitcakes and those you might find at the convenience store Christmas shelf. Bakers using quality ingredients create rich, nutty, and flavorful fruitcakes.
Q. Why did the fruitcake fall out of favor?
A. Historians point toward a variety of reasons for the fruitcakes downfall including mass production, poor ingredients, and iconic jokes. However, another reason may be that a good fruitcake takes time and effort, sometimes up to a week to complete every step.

December 27th Celebrated (and Not So Celebrated) History

The Radio City Music Hall opens under the direction of S.L. “Roxy” Rothafel. The show featured the Roxyettes (later renamed the Rockets), opera performed by Titta Ruffo, Coe Glade, and Vera Schwarz, Leon Rosebrook directing a chorus of 100 voices, and the Radio City Music Hall Symphony Orchestra. At the time, the theater was the largest in the world.

Performing their hit “Come See About Me,” the Supremes make their first appearance on the Ed Sullivan Show.

December 27th Celebrated (and Not So Celebrated) Birthdays

Some of the many achievements of the French chemist and microbiologist include developing vaccines for anthrax and rabies. He also created the process for sterilizing products such as milk to kill microorganisms called pasteurization.

The American comic strip and comic book artist rose to popularity in the 1950s and 1960s with his work on the Tarzan comic strip for United Features.

A power-hitter in the All American Girls Professional Baseball League, Wagner began her career at the age of 15. One of the league’s All-Stars, she played seven seasons, usually in the outfield before continuing her athletic career with the National Girls Baseball League in Chicago. While she played, Wagner pursued her medical degree. Following baseball, she practiced obstetrics for four decades.

In 1990, Hawes founded The Atlantic Paranormal Society to investigate reported paranormal activity. He also starred in and co-produced the SyFy show Ghost Hunters.