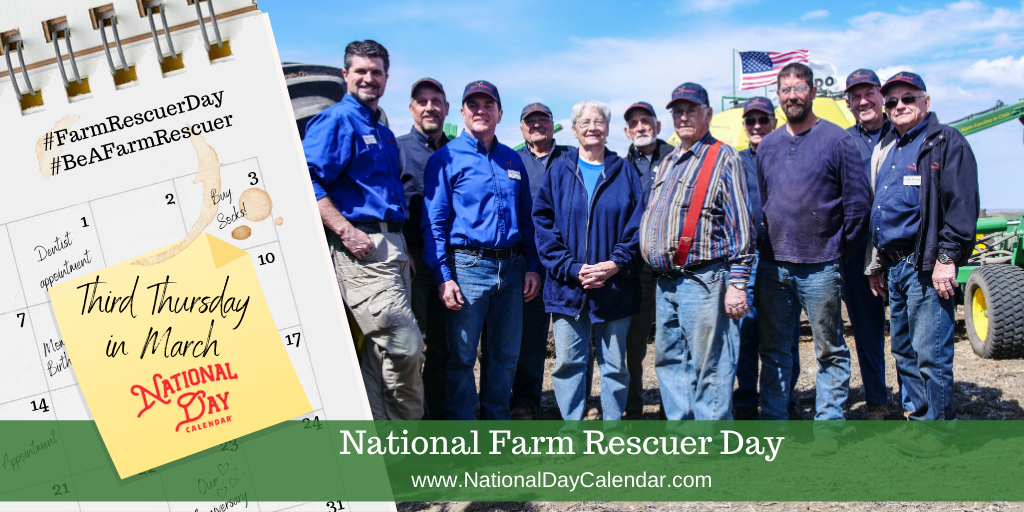 National Farm Rescuer Day dedicates the third Thursday of March to those who support farmers in need.

When crisis strikes in the form of illness, injury or natural disaster, Farm Rescuers throughout the heartland get the jobs done. Whether seeds need planting, hay needs to be baled or crops need to be harvested, these men and women labor in the fields and feed the souls of the farm family when times take a turn for the worse.

What was once a community tradition is now a non-profit called Farm Rescue. Founded in 2005, Farm Rescue and its volunteers have assisted nearly 800 farm and ranch families throughout the region. The day encourages you to join the community that lends a hand when crisis strikes.

Whether a Farm Rescuer volunteers their time, talents or financial resources, their commitment is valuable. Keeping a farm running is hard work. When the unexpected happens, many hands make the work manageable. There are several ways to get involved with Farm Rescue and make a difference on National Farm Rescuer Day.

Consider volunteering your skills and time. Support a volunteer by being a sponsor. Make an individual donation.  Thank a Farm Rescuer and spread the word by using #BeAFarmRescuer and #FarmRescuerDay on social media.

Farm Rescue founded National Farm Rescuer Day in 2017 to recognize all the amazing men and women who help get the crops in the ground or to the market from all around the country. It’s also an opportunity to give thanks to the many individual donors, business sponsors and grantors who make the organization’s mission possible. Founded by Bill Gross in 2005, Farm Rescue has helped nearly 800 families across the region. In 2008, People Magazine named Farm Rescue’s Founder and President, Bill Gross, the original Farm Rescuer. Like Gross, many Rescuers have a deep appreciation for the land and the strong community spirit found in farming and ranching. But, Farm Rescuers come from all walks of life, from coast to coast and often generations removed from the family farm.

The Registrar at National Day Calendar®  declared the day to be celebrated annually on the third Thursday of March.