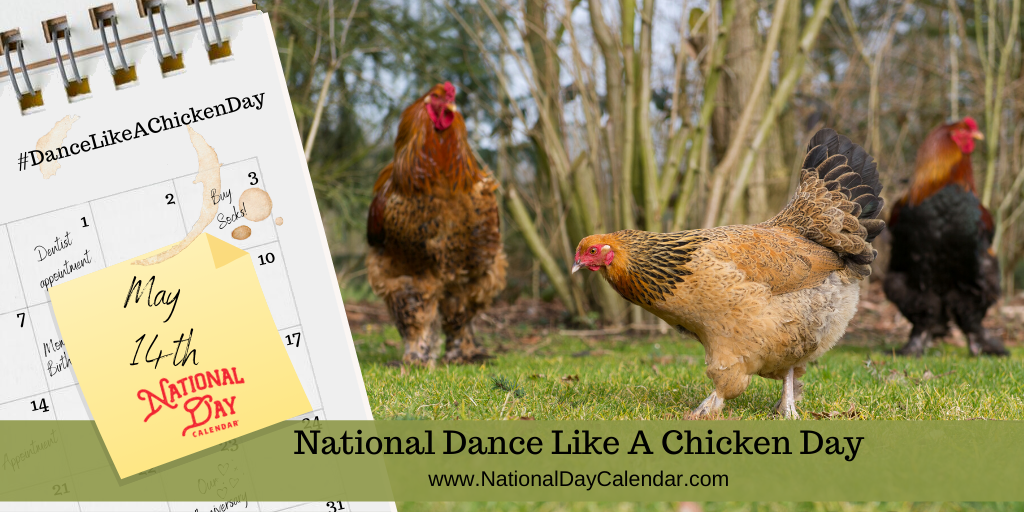 National Dance Like a Chicken Day on May 14th encourages everyone to dance like a chicken! This day entertains from start to finish with people flapping their arms and strutting chicken-like. Everyone has probably danced the “Chicken Dance” at least once in their lifetime. This silly fun song is popular at wedding dances, Oktoberfest, and other celebrations, too. The song gets people of all ages up and moving on the dance floor.

Written in the 1950s by Werner Thomas, a Swiss accordionist, the Chicken Dance didn’t even make it to the United States until sometime in the 1970s. The Chicken Dance is associated with polkas or oom-pah-pah music. Originally written with the name Der Ententanz (The Duck Dance), rumors suggest the song was written as a drinking song for Oktoberfest. The song’s title later changed to Vogeltanz (The Bird Dance).

Upon arriving in America in the 1970s, the song acquired choreography with repetitive beak, wing, and tail motions, as well as the new name, The Chicken Dance.

Dance like a chicken. Be silly. Be erratic. Do The Chicken Dance. Organize a Chicken Dance dance-off. When you do, serve chicken nuggets and chicken fries, fried chicken and chicken-fried steak. Teach someone The Chicken Dance, too, because everyone should know how to participate. Use #DanceLikeAChickenDay to post on social media.

While National Day Calendar has been unable to identify the creator of this celebration, we have found that the phrase “dance like a chicken” existed long before the dance. It often described someone in trouble or upset, usually in the political or sports arena. The phrase often compares the offender to a “chicken with their head cut off” as they dance around trying to get out of their trouble. Others describe a chicken on a hot surface, such as a griddle or frying pan.