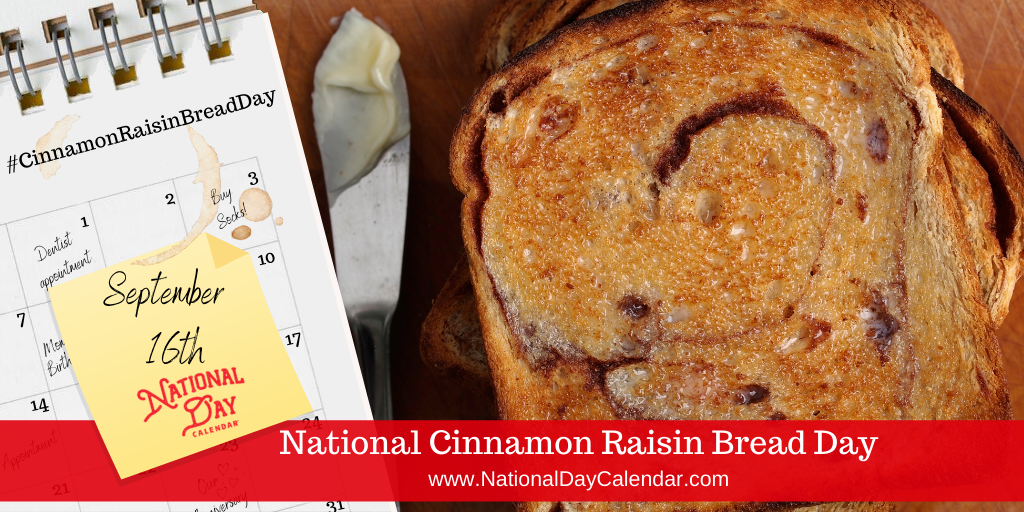 On September 16th, National Cinnamon Raisin Bread Day warms the home and the heart with delicious goodness. In bakeries across the country, we request cinnamon raisin bread more often than many others.  Naturally sweet, the aroma created from baking this bread will make anyone’s mouth water.

Another delicious way to use cinnamon raisin bread is by making French toast. Wisk up eggs, milk, vanilla, and nutmeg in a bowl. Dip the bread in the batter and let it soak up the egg mixture. Fry each piece on a hot griddle. Serve with fresh fruit and maple syrup and your morning will start off amazingly!

The same idea can be applied to an egg bake, too. When prepared ahead, egg bakes made with cinnamon raisin bread easily feed a large family or guests for the weekend. You’ll impress everyone with a cinnamony sweet dish like that.

Stop at a local bakery or make some homemade. Either way, be sure to share with someone you care about. That’s the best way to #CelebrateEveryDay! Use #CinnamonRaisinBreadDay when posting on social media.

National Day Calendar’s research is still seeking the source of this food holiday.

September 16th Celebrated (And Not So Celebrated) History

Oliver Wendell Holmes writes the poem “Old Ironsides” in tribute to the frigate the USS Constitution. At the time the poem was written, the Navy was on the verge of scrapping the legendary ship. However, public support for saving and preserving it won the military over. It was retired in 1855 and now is a floating monument in Boston.

Aboard the Beagle, Charles Darwin arrives at the Galapagos Islands. His visit would have a profound impact on the naturalist and the formation of his Theory of Natural Selection.

Congress grants a federal charter to the American Legion. The service organization is comprised of military veterans.

The first peacetime draft in the United States becomes law when Franklin Delano Roosevelt signs the Selective Training and Service Act. The act required all men between the ages of 21 and 45 to register. Once the United States entered World War II, the age requirements broadened to 18 to 64. The draft ended in 1973, once again creating an all-volunteer military.

Making copies got easier when the Xerox 914 was demonstrated to the public. The inventor, Chester Carlson, also invented the process called xenography.

President Barack Obama signs the America Invents Act, ushering in significant changes to the U.S. patent system. Of the changes included in the legislation includes a “first to file” clause, electronic filing incentives and fast track options. The “first to file” clause eliminates the idea of “first to invent” which often led to numerous and expensive lawsuits.

In 2007, Nidhi Bansal began collecting stickers. By 2013, her collection had grown to 102,317 stickers and established Bansal as the world record holder for a sticker collection.

September 16th Celebrated (And Not So Celebrated) Birthdays

Miriam Benjamin became the second African American woman to receive a patent from the U.S. patent office. Her invention, the Gong and Signal Chair for Hotels, created a way for customers to alert a waiter that service was needed without waving them down.

In 1930, Schick received a patent for a dry electric shaver. He developed the invention while recuperating from an injury.

The psychoanalyst theorized both environmental and social influence on neuroses in humans.

The American explorer led expeditions to the Arctic and wrote several books about her experiences. Her amassed knowledge of the Arctic led the U.S. government to appoint her as the head of an investigation of magnetic and radio phenomena in the Arctic.

The engineer founded Bentley Motors in 1919. Today, the brand still produces automobiles and is owned by Volkswagen AG.

Along with his wife, Margret Rey, the illustrator created the children’s book series, Curious George.

The inventor is best known for his invention of the rabbit ears – the dipole antenna for television. His invention immensely improved the reception of televisions in the 1950s and 1960s.

Born Riley B. King, the blues musician developed a style that influenced generations of guitar players and musicians.

The pitcher played in the All American Girls Professional Baseball League for six years. During her career, she earned All-Star berths and was one of the league’s winningest pitchers.

The small forward played 14 seasons in the NBA with the Minneapolis (now Los Angeles) Lakers. He would later take on the role of coach for the New Orleans Jazz. In 1977, he was elected to the Naismith Memorial Basketball Hall of Fame.

The world-famous illusionist began practicing magic at the age of 10. By the age of 12, Copperfield became the youngest magician admitted to the Society of American Magicians.

The Los Angeles Dodgers pitcher earned World Series MVP honors in 1988 and the National League Cy Young Award in 1989. His career spanned 18 years in the MLB.

Since the comedian’s first appearance on Saturday Night Live, Poehler has also launched a comedic film career. She’s known for her numerous roles, including those in Blades of Glory, Sisters, and the television sitcom Parks and Recreation.