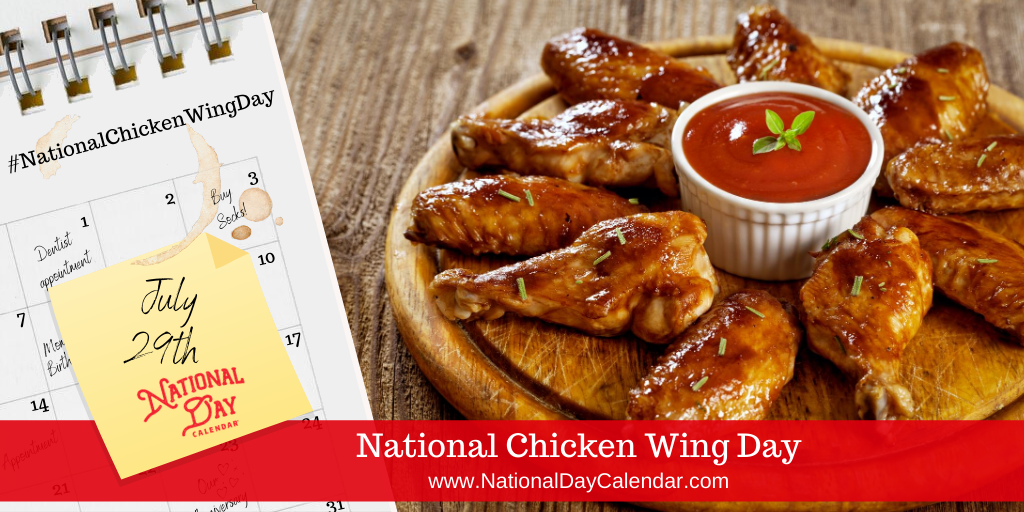 On July 29th, National Chicken Wing Day encourages a frenzy of dipping and sauce tasting. With so many choices, be sure to pace yourself!

The day celebrates the little appetizer that could. Also known as buffalo wings, hot wings or just wings, each of us eats about 290 per year. While a chicken has two wings per bird, it produces four of these tasty morsels. That’s because when we dissect the wing, we break it down into the wingette, drumette, and tip. The wingette and drumette get seasoned and fried into the deliciousness we devour at tailgate parties and trivia nights.

While many people do call them hot wings, one of the most popular sauces is ranch dressing. Another go-to dip is bleu cheese. Although, plenty of spicy sauces fill the menus. Since chicken wings are usually deep-fried, celery, carrots or other crunchy veggies accompany the dish to counterbalance the spice and fat.

Head out to your restaurant of choice and order some chicken wings. Or make them at home and explore The Seven Mother Sauces to help you make your dipping outstanding! We even have some recipes for you to explore.

And don’t forget the chicken wing offers! Do you have an offer? Use the Contact Us link to let us know!

Post on social media using #NationalChickenWingDay and encourage others to join in.

After a number of years of different establishments selling their version of Buffalo Wings, the city of Buffalo, NY in 1977 proclaimed July 29th to be National Chicken Wing Day. Establishments like the Anchor Bar, Wings n’ Things, and Duff’s all became famous for their wings.