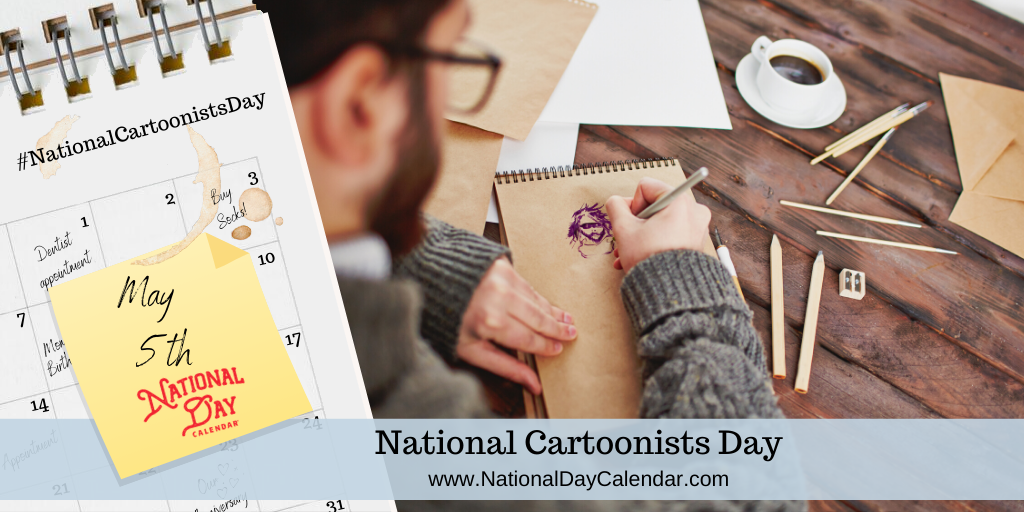 Observed on May 5th each year, National Cartoonists day honors all those creative ink-stained artists, past and present, and the fascinating pieces they have created. Throughout the years, their talents bring humor, entertainment into our lives while provoking thought and debate, too.

American comic strip writer and artist, Richard Outcault (January 14, 1863 – September 25, 1928) is considered the inventor of the modern comic strip.  At 15 years of age, he studied for three years at the McMicken University’s School of Design in Cincinnati. Outcault created the comic strips The Yellow Kid and Buster Brown.

Outcault was a 2008 Judges’ Choice inductee into the Will Eisner Comic Book Hall of Fame.

On Sunday, May 5, 1895, the readers of the New York World discovered an exciting new addition in their morning paper. On the pages, they found Outcault’s full-color drawings featuring a big-eared, barefoot little boy with a mischievous grin. The first color installment of the cartoon called Hogan’s Alley would later become known as The Yellow Kid and was the first commercially successful cartoon icon.

May 5th Celebrated (and Not So Celebrated) History

Pitching for the Boston Americans, Cy Young completed the first perfect game in modern baseball history. He also pitched a no-hitter, leading the Americans to a 3-0 Boston win.

Aboard the Freedom 7, astronaut Alan Shepard became the first American in space. He was selected from among seven men in the Mercury space program for the mission.

Secretariat breaks a racing record at Kentucky Derby with a winning time of 1:29 2/5. In the coming months, Jockey Ron Turcotte would ride Secretariat to Triple Crown history, winning the Preakness Stakes and the Belmont Stakes.

May 5th Celebrated (and Not So Celebrated) Birthdays

Born Elizabeth Cochran in Cochran Mills, Bly made a name for herself when she went undercover as a mental patient on Blackwell’s Island as an investigative journalist for the New York World. The exposè led to real change in the New York City mental health system. The World also sent Bly on a Jules Verne-style journey around the world, inspired by the author’s novel Around the World in Eighty Days.

The talented guitarist, blues singer, and composer was an enigma until after his death in 1959. Recording under different names and labels with a variety of artists, Willie Samuel McTell never saw much success during his lifetime. However, he produced assorted sessions across several labels and he performed with unquestionably gifted talent in each genre.

The pioneering archaeologist is most noted for her work during the 1930s including excavations in Mount Carmel, Palestine. One important discovery included the first-ever female Neanderthal skeleton outside of Europe.

Had James Beard been a better actor, the face of American cuisine might have an entirely different quality. Beard’s call to the culinary world led to more than a dozen cookbooks, The James Beard Cooking School, cooking shows and inspired chefs and amateur cooks.

The award-winning British singer-songwriter gained prominence in the 2000s with hits like “Chasing Pavements” and “Someone Like You.”