National Burrito Day on the first Thursday in April celebrates the tasty and versatile Mexican dish wrapped in a tortilla.

A burrito is a heavy tortilla wrapped around meat, cheese, tomato, rice, beans, vegetables, and sauces. Like many other tortilla dishes, the burrito is flexible. The cook chooses the meat fillings from ground beef, shredded chicken, shredded beef or shredded pork. The same applies to the bean choices, often ranging from black, red, whole or refried beans. Once again, the flexibility of choice applies to the vegetables allowing the cook to grill the vegetables or keep them fresh. Spices such as cumin, chili powder, and oregano give the burritos an authentic Mexican flavor. For added crunch, chimichangas are burritos that have been deep-fried.

The word burrito first appeared in the Dictionary of Mexicanisms in 1895. The Guanajuato region of Mexico uses the term and means little donkey in Spanish. It is possible that it stems from the appearance of the packs and bedrolls donkeys used to carry. In other regions of Mexico, similar types of food are known as flauta. 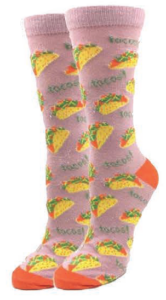 Celebrate National Burrito Day by wearing your favorite pair of TexMex socks! Keep checking our selection. It changes all the time.

National Day Calendar continues to research the origin of this tortilla-loving food holiday.

Q. What kind of tortilla is used to make a burrito?
A. Burritos are typically made with a flour tortilla.

Q. Can burritos be meatless?
A. Yes. Burritos can be made without meat and still be a hearty meal thanks to beans and cheese.

Q. Are burritos difficult to make?
A. No. You can make a delicious, flavorful burrito right at home.