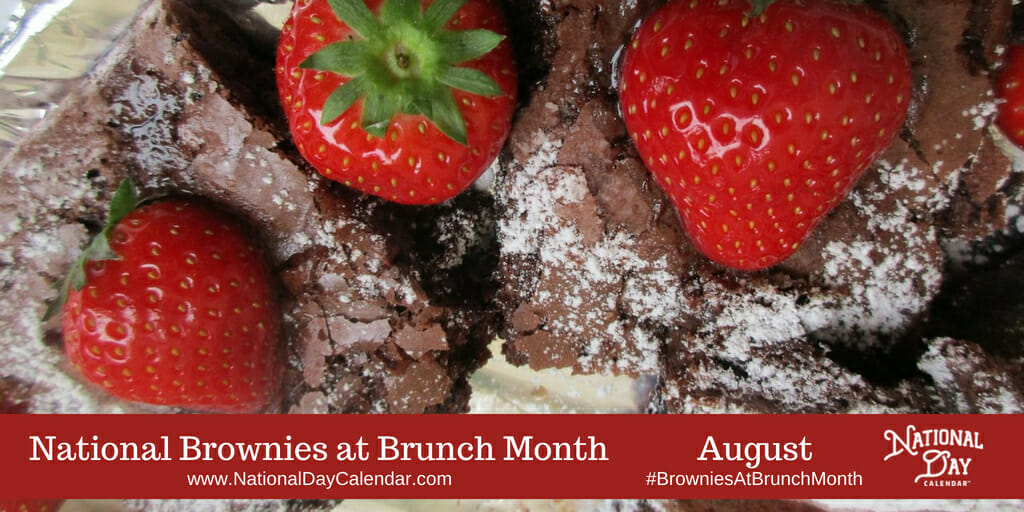 No one should ever need an excuse to eat a brownie in the morning, but if you do, August is National Brownies At Brunch Month!

We’re not sure where the original brownie came from, but we like to celebrate brownies a few times a year at National Day Calendar. One legend has it that Bertha Palmer, a Chicago socialite, who in 1893 asked a pastry chef to prepare an appropriate dessert for ladies attending the World’s Columbian Exposition. Specifically, she wanted something like a cake that was small enough to include in boxed lunches. The result was the “Palmer House Brownie.” By 1907, the brownie was well-established, appearing in Lowney’s Cookbook as the “Bangor Brownie.” Maine food educator Mildred Brown Schrumpf claimed that the brownie was invented by Bangor housewives. The largest brownie ever made was cooked up in 2001 at the Hudson Valley Chocolate Festival in Suffern, New York. It weighed 3,000 lbs.

Brownies are surprisingly low in calories. Although loaded with sugar, brownies also can be prepared as low-sugar brownies. The experts recommend you cut back the sugar intake by 25 – 50% without seriously compromising the texture. Brownies are rich in carbs. Carbs provide energy. If you’re active, a helping of carbs first thing in the morning can be an excellent thing. Brownies are also relatively low in saturated fat, associated with the bad kind of cholesterol. However, brownies don’t offer much in the way of protein, though eggs are part of the mix. If you want to increase protein in your brownies, you can mix in some nuts, protein powder or peanut butter into your batter. Walnuts are the most popular protein added to brownies.

Enjoy them in moderation, for brunch, or any time of day.


Enjoy a brownie, or its light-colored cousin the Blondie! Use #NationalBrowniesAtBrunchMonth in social media correspondence.

Our research has been unable to determine the origin of National Brownies At Brunch Month.