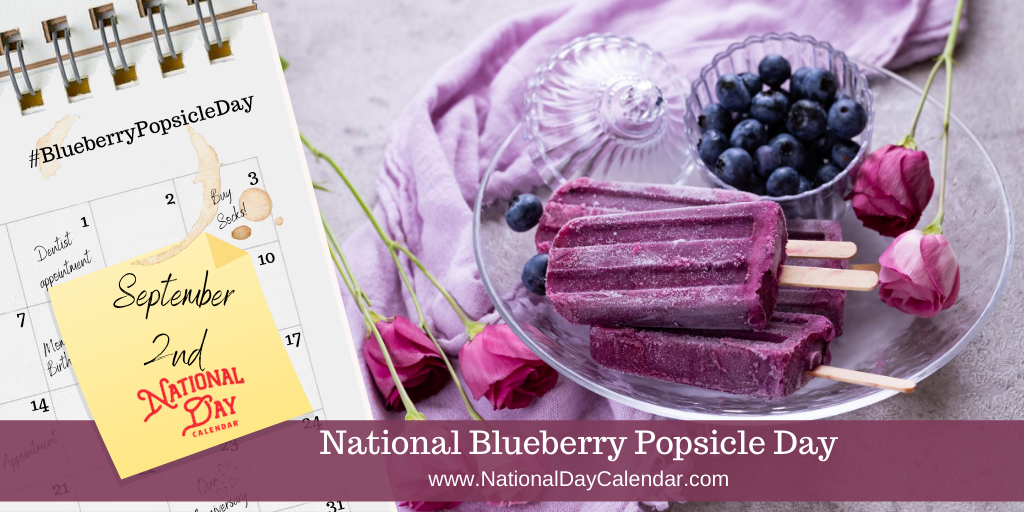 National Blueberry Popsicle Day on September 2nd also kicks off National Blueberry Popsicle Month. Scheduled in the midst of the dog days of summer, it’s a delicious way to cool off. Purchase a box of blueberry-flavored Popsicles or make your own. Either way, the treat will be a tasty one! With the end of summer at hand, now is the time to celebrate this National Day.

In San Francisco, California, in 1905, 11-yr-old Frank Epperson was outside on his porch, mixing water with a white powdered flavoring to make soda.  Upon going inside, he left it there on the porch with the stirring stick still in it.  That night the temperature reached a record low and the following morning, Frank discovered the drink had frozen to the stick.

Years later, in 1922, Epperson introduced his treat at a fireman’s ball where it was a huge success. Then in 1923, he made and sold his frozen treat-on-a-stick at an amusement park in Alameda, California.  Epperson applied for a patent in 1924 for his frozen confectionery, which he called “Epsicle” ice pop.  He then renamed it “Popsicle“.

Be sure to get yourself a blueberry Popsicle and use #BlueberryPopsicleDay to post on social media. Here is an Easy Homemade Blueberry Popsicles Recipe to try out. We have some other terrific ideas for a berry blueberry celebration:

Don’t forget to share your Blueberry Popsicle celebration on social media, too. Use #NationalBlueberryPopsicleDay.

September 2nd Celebrated (and Not So Celebrated) History

Over a year after the U.S. Constitution was ratified, Congress created the Treasury Department. With the third Cabinet office created, President George Washington placed Alexander Hamilton in charge as Secretary of Treasury.

While laying out his foreign policy at the Minnesota State Fair, Vice President Theodore Roosevelt quoted the West African proverb, “Speak softly and carry a big stick; you will go far.” It became known as “Big Stick diplomacy.” Following his election to the presidency, he applied his Big Stick diplomacy to foreign policy and would later win the 1906 Nobel Peace Prize.

Bing Crosby makes his solo radio debut in his series called “15 Minutes With Bing Crosby.” Soon after, the performer launched into an international music and film career.

The baseball film Eight Men Out debuts. Starring John Cusack, Christopher Lloyd and Charlie Sheen, the film re-tells the story of the 1919 Chicago White Sox team and the players accused of accepting money to throw the series.

Decades of space competition come to an end when the United States and Russia agree to build a space station.

September 2nd Celebrated (and Not So Celebrated) Birthdays

Lucretia Peabody Hale is an American novelist also noted for her children’s book. Some of her stories include The Peterkin Papers. She also contributed to the book Six of One by Half a Dozen of the Other: An Every Day Novel by Harriet Beecher Stow.

The talented artist is best known for his work depicting African American culture. He’s also the author of the book Lil Dan, the Drummer Boy.

Greenburg launched the Snapple Beverage Corp with two business partners. The business’s original name in 1972? Unadulterated Food Products. However, they changed the name to Snapple after one of their failed products.

Glenna Sue Kid played four seasons in the All American Girls Professional Baseball League. Though she was only a teenager when she joined the league, her phenomenal pitching did not go unnoticed. Kid’s arsenal of pitches was in demand making her popular with the fans.

Markle is credited with inventing the film colorization process. In 1987, a patent for the process was issued under US Patent No. 4710805.

In 1985, McAuliffe was selected as an astronaut for the NASA Teacher in Space Project. On January 28, 1986, she along with 6 other crew members perished when the Space Shuttle Challenger broke apart 73 seconds into its flight.

Connors achieved professional tennis success during the late 1970s. He is also known for his rivalry with John McEnroe.

The businessman is co-founder of Cirque du Soleil. In 1984, the elaborate circus performance debuted.

While the actor has played numerous roles, his career has been buoyed by several franchise films. These include The Maxtrix, John Wick and Bill and Ted’s Excellent Adventure.

The versatile actress is known for her roles in Desperado and Frida. Her producing credits include the television comedy Ugly Betty and the drama Monarca.

As an author of two etiquette books, Hanson has become the modern equivalent of Miss Manners. He doles out his advice on social media, radio and television.