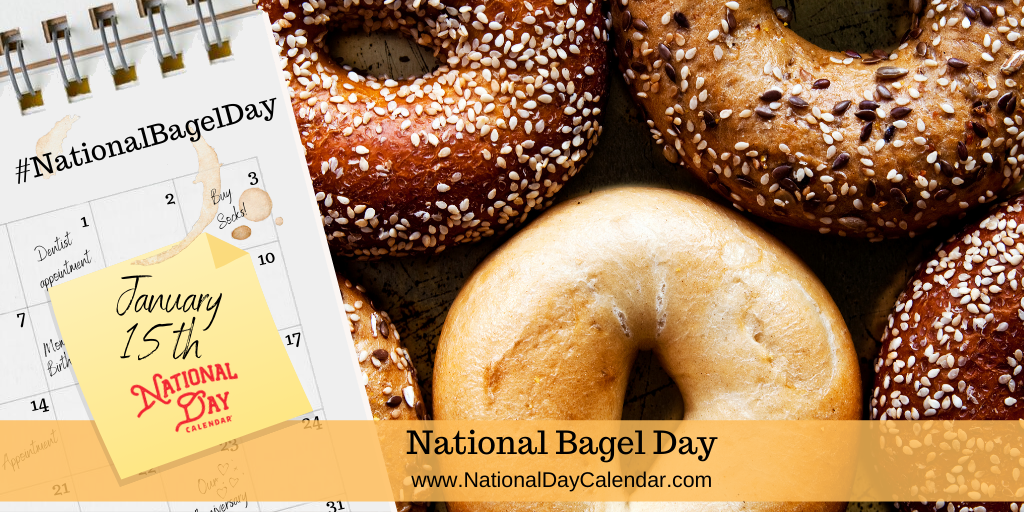 Toast up your favorite flavor on National Bagel Day. On January 15th, don’t forget to pick your favorite schmear, too. Make it for breakfast, lunch, snack, or all of the above!

This kosher carbohydrate brings complex flavors to the deli and sandwich bar. In the United States, we love our crunch-on-the-outside-chewy-on-the-inside bread. So they’re a staple in our freezers and as a winter pick-me-up.

Polish-Jewish immigrants introduced the bagel to the United States. Throughout New York City and the surrounding boroughs, they grew thriving businesses. Of course, it didn’t take long for the bakers to organize. In 1907, they created the International Beigel Bakers’ Union. For decades, Bagel Bakers Local 338 held contracts with nearly all bagel bakeries for its workers in and around the city.

Until the 1960s, bakeries made bagels by hand. Then Daniel Thompson invented the bagel maker, and along came a heated debate of man versus the machine. Thereafter, the question of the better bagel dangled before customers. Was it the handcrafted beigel or the manufactured bagel?

The bagel became more common throughout North America during the last quarter of the 20th century. Credit for the bagel’s spread across the country goes in part to the efforts of bagel baker Harry Lender, his son, Murray Lender, and Florence Sender. Their pioneering efforts led to the automated production and distribution of frozen bagels in the 1960s. Murray also invented pre-slicing the bagel.

Have your favorite bagel combinations. Invite friends to get a schmear or two with you. Try new combinations. Do you like yours toasted or not? Breakfast bagels, pizza bagels, cinnamon bagels, they all sound so delicious right now. Which one will you choose?

Brush up on the bagel’s history in the United States. It’s a vibrant and enduring one. Use #NationalBagelDay to share your favorites and give your favorite bagel shop a shoutout, too!

Once, the bagel shared a day with lox, but no longer. As of 2020, the bagel branched out on its own to celebrate all kinds of bagels.

Q. I’m trying to watch what I eat. Can I still celebrate National Bagel Day?
A. Yes! Bagel makers understand the need to take care of our health. That’s why many of them make mini bagels at a fraction of the carbohydrates and calories of a full-sized bagel.

Q. What’s the best way to cut a bagel?
A. Bagels are round and a bit awkward to slice. The best way is to lay the bagel flat and slice it horizontally with your dominant hand while holding it in place with your opposite hand. Keep your fingers and thumb out of the way. This video provides a detailed demonstration: