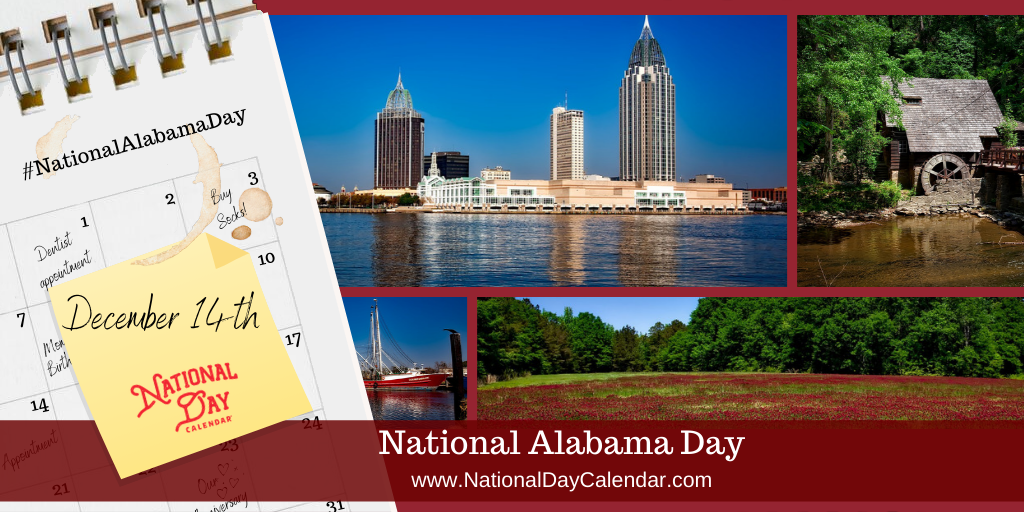 The 22nd state to join the union, Alabama has played pivotal roles in U.S. history, scientific advancements and its magnificent landscapes attract visitors from far and wide.

Alabama enjoys 60 miles of shoreline along the Gulf Coast. While the coastal region is dotted with swamps and bayous, it also includes beautiful sandy beaches. Move northward from the coast, and the lowlands provide the fertile soils of the Black Belt, land that long yielded productive cotton crops. The Northern half of the state is dominated by the forested hills and valleys of the Appalachians.

As the original capital of the Confederacy until May of 1861 during the American Civil War, the small town of Montgomery set the stage for the secessionist government. Nearly 100 years later, the Civil Rights Movement would find a home and erupt across the state marching its vision to the rest of the country.

Bringing diversity to agriculture at a time when the boll weevil was wreaking havoc on cotton crops, George Washington Carver provided the opportunity for successful planting and harvesting of a legume that continues to be popular not only in the south but across the United States. The peanut brought new farming methods and agricultural stability to a suffering southern industry.

In Alabama, and all across Southern states, the meat and three will fill you up with more satisfying comfort food than you can find anywhere other than your mother’s kitchen. The restaurant style includes a mouth-watering homemade meat of your choosing – crispy fried chicken, juicy sweet ham or tender roast beef – and then a selection of three sides. A roll and dessert are usually included as well. All this is served in a relaxed, downhome atmosphere.

Join National Day Calendar as we explore Alabama’s rich history and remarkable landscapes. Get to know their people, culture and uncover the hidden places of Alabama! Use #NationalAlabamaDay to share on social media.

For a complete list of Illinois State and National Parks & Historic Sites visit www.alapark.com and www.nps.gov.  Check out a few of the featured sites around the state below. William Weatherford was a respected Creek Chief who surrendered to Andrew Jackson to save his people during the Creek War of 1813 and 1814.
After illness took her sight and her hearing, Helen Keller found her voice and became an advocate for the blind and deaf, an author and lecturer. Her story and the challenges she faced along with her mentor and teacher, Anne Sullivan, have been told through novels, plays and film.
As a military surgeon, Lafayette Guild studied how yellow fever spread. After serving in the Confederate Army, he continued his studies which aided research into combatting the disease.
Founder of the Political Equality Association, Alva Belmont used her fortune to serve the Women’s Rights Movement by becoming one of the National American Women Suffrage Association’s benefactors. Belmont believed firmly in a more aggressive approach than the more sedate methods to creating change other activists preferred. She also organized labor groups and supported addressing women’s rights in the courts.
One of the pioneers of the 4-H Clubs, Luther Duncan also served as the Alabama Extension Service director and Alabama Polytechnic Institute (now Auburn University) president.
In December of 1955, Rosa Parks sparked the Mongomery Bus Boycott when she refused to give up her seat to a white passenger after a long day of work. The boycott shined a light on the issue of segregation and propelled the Civil Rights Movement into the headlines.
In 1936, Jesse Owens won four track and field gold medals at the Berlin Olympics amid the rise of Adolph Hitler and his Nazis regime.
Joe Louis dominated the boxing ring and earned his first heavyweight crown in 1937 when he knocked out James J. Braddock in the eighth round.
Best known for her Pulitzer Prize-winning novel To Kill a Mockingbird (1960), Harper Lee later accepted a post to the National Council of the Arts. While Mockingbird brought celebrity and wealth to Lee, she didn’t publish another novel until 2015. Originally written in 1957, Go Set a Watchman follows up on the main characters in Mockingbird.
Known for his role as Gomer Pyle on the Andy Griffith Show and his baritone singing voice, Jim Nabors performed comedy on several variety shows.
Hank Willians left a country music legacy in a short period of time. Williams’ life played much like his songs, full of turbulence and heartache, but he still inspires many of today’s country and western performers.
Condoleezza Rice broke several barriers for African American women when she became the first to serve as national security advisor and U.S. Secretary of State.
Best known as the acrobatic shortstop of the St. Louis Cardinals, Ozzie Smith earned the nickname “The Wizard of Oz” for his magical defensive plays in the infield. He was inducted into the National Baseball Hall of Fame in 2002.
After becoming the first African-American woman in space in 1992, Mae Jemison continued to share her science and technology knowledge through the founding of the Dorothy Jemison Foundation, authoring books and teaching.