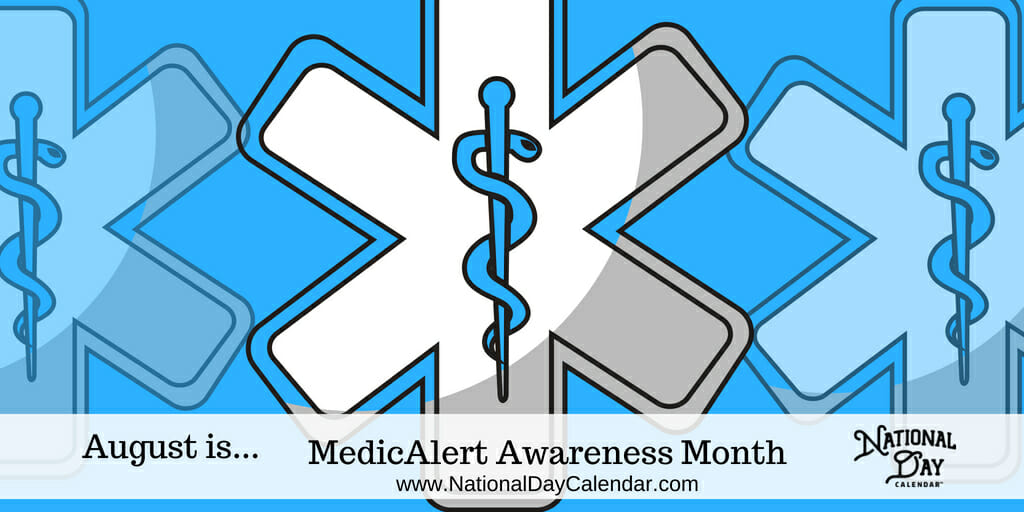 Not all medical bracelets are created equal and that’s why August has been designated as MedicAlert Awareness Month.

Are you a diabetic? Are you allergic to penicillin? Do you require certain life-saving medication in an emergency? Do you wish to invoke a Do Not Resuscitate (DNR) order under certain situations? MedicAlert can tell the doctors caring for you what they need to know. A medical ID can save precious time in diagnosing the reason for the emergency. It can also clue doctors in on any allergies the wearer has before administering medication or first aid. In an emergency, you may be unable to speak for yourself. A MedicAlert bracelet speaks for you – and may well make the difference in saving your life.

The MedicAlert Foundation has been around for over sixty years. In 1953, 14-year-old Linda Collins of Turlock, California cut her finger badly and had to go to the hospital. During a sking test at the hospital (standard procedure), Linda went into anaphylactic shock and nearly died. Motivated by her brush with death, Linda thought up the concept of the silver bracelet, with the medical symbol on one side, special medical instructions on the other. Linda and her father, a doctor, sent the design to a jeweler in San Francisco who designed the first MedicAlert bracelet.

In the next decade, MedicAlert grew to national prominence in the medical field. In the seventies, MedicAlert launched its computer database, which it vastly updated and expanded in the nineties. Today, the MedicAlert website provides useful information and resources for wearers of MedicAlert bracelets, their families, and the medical community. MedicAlert has affiliates in nine countries: the U.S., Canada, Great Britain, New Zealand, Australia, Ireland, Malaysia, South Africa, and Zimbabwe.

MedicAlert also works in conjunction with the Alzheimer’s Association, has a national “emergency response service” for individuals with Alzheimer’s or dementia, at risk of becoming lost. If you’re interested in getting a Medic Alert bracelet for yourself or a family member, contact the Medic Alert Foundation at MedicAlert.org.

HOW TO OBSERVE
Learn more about the MedicAlert bracelet. Use #MedicAmertBracelet in social media correspondence.