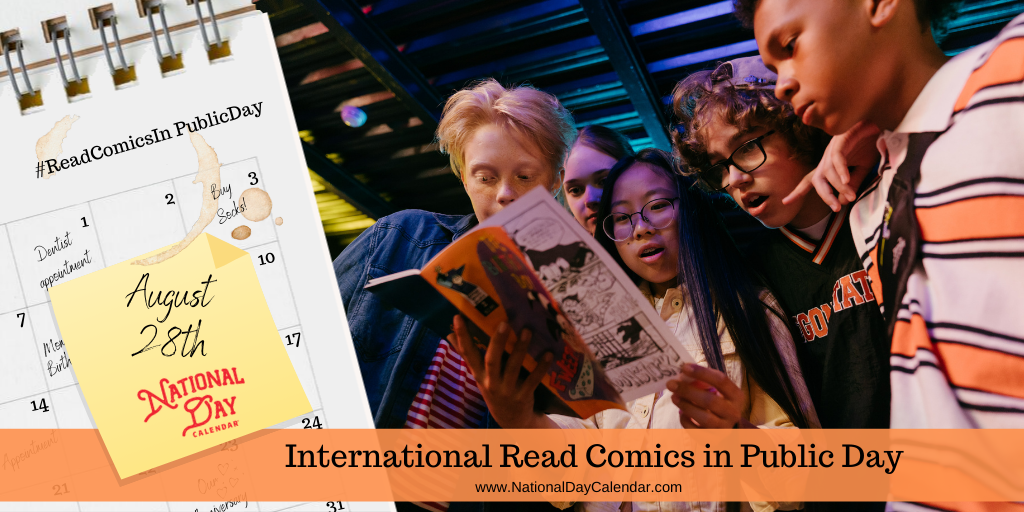 Every year on August 28th, International Read Comics in Public Day encourages the general public to read comic books for all to see. It’s also a day to celebrate the various comic genres and styles.

Superman, Batman, Wonder Woman, Captain America, and Spiderman are some of the most popular superheroes in history. These fictional characters are also some of the biggest names in the world of comics. In recent years, comics have increased immensely in popularity. What some may not realize, however, is how long comics have been around. The first modern comic book was published in 1933. Famous Funnies was comprised of reprinted newspaper comic strips.

Three years later, Lee Falk created the first superhero, The Phantom. The original superhero made his newspaper comic strip debut in 1936. In 1938, writer Jerry Siegel and artist Joe Shuster created one of the most popular superheroes of all time, Superman. The man of superhuman strength first appeared in Action Comics. Superman became the prototype for many superheroes featured in comic books. Other famous comic characters include Charlie Brown, Donald Duck, Calvin & Hobbes, Dennis the Menace, Garfield, and Beetle Baily.

Throughout the years, there have been many genres of comic books. Some of these genres include:

People around the world enjoy reading comic books. India is the country in which people read the most comic books. Thailand and China follow close behind. Sadly, In the United States, 59 percent of the population has never read a comic book. If you’re one of those, today would be a great day to read a comic book for the first time!

On this day, all around the world, people read comic books in public. Some might choose a park or coffee house to read their comic book. Others might do their comic book reading at the library. As long as the comic book is read in public, that’s all that counts! Share this day on social media with a picture of your favorite comic book or character with #ReadComicsInPublicDay.

Comic lovers Brian Heater and Sarah Morean began International Read Comics in Public Day in 2010. The duo was also the creator of a comic blog called, The Daily Cross Hatch. They chose August 28th to celebrate Jack Kirby’s birthday. Kirby was an American comic book artist, writer, and editor. He helped to co-create the Fantastic Four, the Incredible Hulk, and Iron Man.