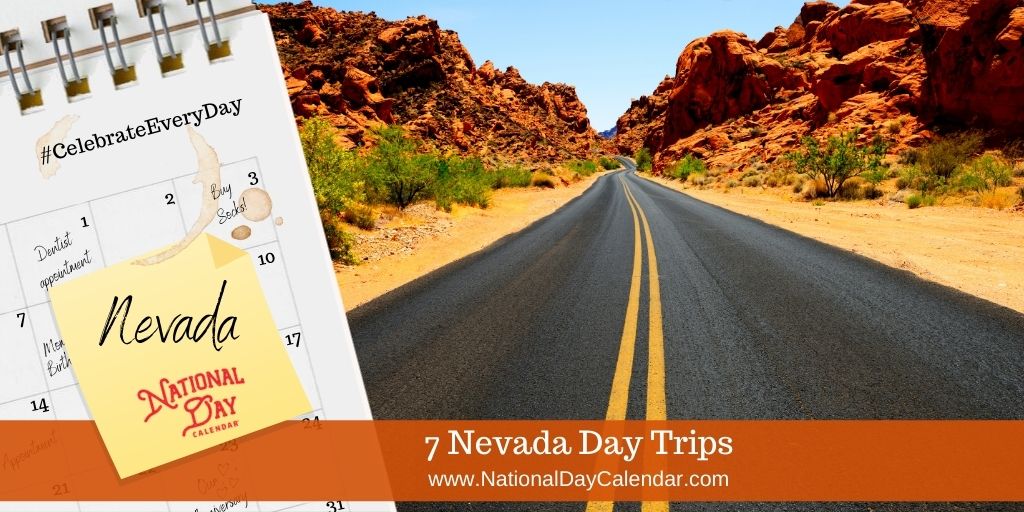 Traveling outside of Las Vegas and Reno, you might get the idea that everything else in Nevada is out of the way. And that might be true, especially when you look over this list of 7 Nevada Day Trips. If you’re looking to get away from manufactured tourism and explore the Sagebrush State from a different perspective, this list is for you.

The 3,800-acre ranch is located in Nevada’s Hualapai Geothermal Flats and supports three magnificent geysers resulting from well drilling. The first began to form in 1916 after attempts to bring agriculture to the area through well-drilling. The water supplied by the geyser was both too hot and mineral-rich and began to form colorful cones. Two other geysers were created from similar attempts. In 2016, Burning Man purchased the land and private nature walks can be scheduled to see the geysers and hot springs.

Located smack dab between Reno and Las Vegas, Tonopah honors Nevada’s mining history. Explore the Old Cemetery and Tonopah Historic Mining Park. As you meander around town, take in the many murals that decorate historic walls and depict the history of the town and the nation. Not far from the cemetery you can visit the Clown Museum located in the Mizpah Hotel. At night, be sure to gaze up at the night sky. You’ll see more stars than ever before!

Up the road from Tonopah, stop to visit Rhyolite. The town became a victim of the boom and bust era of silver mining and eventually became a dusty, lonely ghost town. One of the most interesting remains is the house completely made from glass bottles and is no longer in Rhyolite but in the neighboring town of Beatty. Beatty is also home to the Goldwell Open Air Museum where you will find several permanent outdoor art displays. Beatty also boasts Death Valley Nut and Candy, the largest candy store in the United States.

One of the most notable stops along Route 50 is Ward Charcoal Ovens State Historic Park. Nestled in the Egan Mountain Range, six beehive-shaped charcoal ovens remain from the silver mining era. The park is also host to camping, hiking, and fishing.

Just outside of Wells, Nevada, this ghost town began as a shining beacon of hope in the early part of the 20th century. The Pacific Reclamation Company began developing plans for an agricultural community through irrigation called Metropolis. Even the name of the town suggests a thriving, vibrant community. The expectation of a true metropolis in the northeastern part of the state seemed more than possible as streets were graded and businesses were built. A school and post office seemed to be a mark of a bustling and growing town. However, lawsuits regarding the diversion of water from other communities created issues for investors and farmers alike. As a result, explorers can find many remnants of the town and no residents.

Overton, Nevada is located just outside Valley of Fire State Park. Drive through or hike in Nevada’s oldest state park and take in the sandstone and red rock scenery. The wind-carved red rock formations give the park its name. Some of the most unique formations are located the Beehives and Atlatl Rock petroglyphs. When you return to Overton, be sure to check out the Lost City Museum.